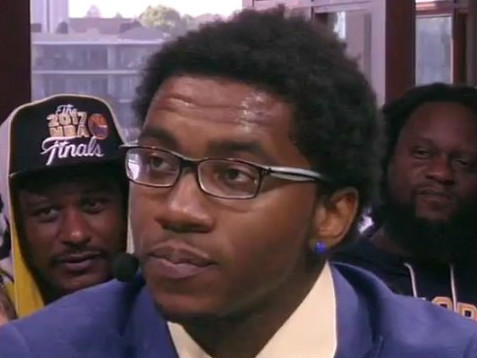 James Harden is officially free from the BasedGod curse!

Lil B appeared on ESPN’s First Take Sunday (June 4) to speak on the NBA Finals and was asked about the dreaded curse.

Harden was first cursed back in May 2015 for not crediting Lil B with the celebratory cooking dance the Houston Rockets star performed during games. The curse was temporarily lifted before being imposed again for the 2015 season.

This year, Lil B said the curse was still in effect and threatened Harden’s chances at being named MVP.

After a 39-point loss to the San Antonio Spurs that ended the Rockets season last month, Lil B hinted at ending the curse for good and now it’s official.

Game 2 of the NBA Finals tips off at 8 p.m. EST as the Golden State Warriors (with Kevin Durant curse-free), seek to take a two-game lead over the Cleveland Cavaliers.