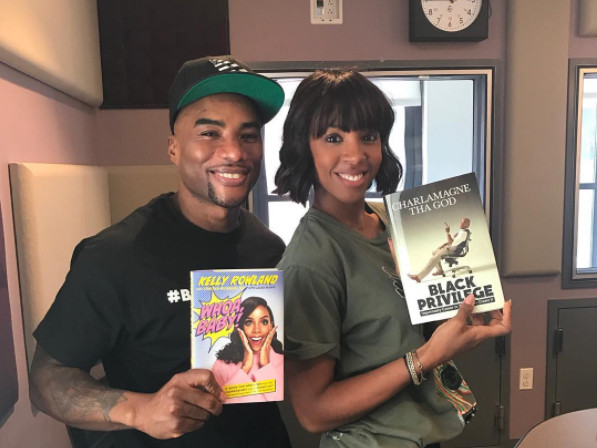 THE GRAM – Charlamagne Tha God and Lil Duval appeared to be embroiled in yet another social media war after the comedian/actor told the radio personality to “humble” himself on one of his Instagram photos. Charlamagne, of course, quickly fired back and claimed Lil Duval essentially employs fellow comedian/actor Jayski as his joke ghostwriter. The pair are both starring in DJ Pooh’s forthcoming stoner, Grow House 420.

It all kicked off early Monday (April 10), when The Breakfast Club host posted a photo of himself with Destiny Child’s Kelly Rowland showing off their books, Black Privilege and Whoa Baby, respectively.

“Nigga swear he all that cuz he got books and shit,” Lil Duval wrote in the photo’s comment section. “Humble yourself.”

“Oh but when you out here posting pics of your little Growhouse Jet, and that little movie you got with Pooh that you starring in, I don’t be hating but I could,” Charlamagne wrote back before splicing in a bit of Meek Mill and Rozay: “You not MmG bruh, you just mad Jay Ski writes all your jokes and we found out. Don’t do this because you not going to pull up and my last request is that all producers please get paid.”

Just out here building with other authors and what not, @kellyrowland #WhoaBaby is out tomorrow!!!

While it initially seemed like the two were legitimately heated, it soon turned into a light-hearted exchange with Duval quoting lyrics from 2Pac’s “Hit ‘Em Up” and “Against All Odds,” and Charlamagne responding with lines from Nas’ “Ether” and Jay Z’s “Takeover.”

“Tellem bout how I use to let you sleep on my couch,” Duval replied. “And beg a bitch to let you sleep in the house. Now you all about books…..you know what I’m not going back and forth with you on this internet shit. You and I know what’s going on.”

“Oh you thinking you getting girls now because of your looks,” Charlamagne retorted. “Negro please, keep it up, you was a ballerina I got your pictures I seen ya, pull up then I got stacks of comic books bigger than you. Not doing this hoe shit on social media, you got the social security number nigga do something.”

With Lil Duval apparently on his way to New York City for a show this Thursday (April 14), it wouldn’t be surprising if they hashed it out on The Breakfast Club later this week.

Charlamagne was recently honored at the Columbia Career Connect Conference in his home state of South Carolina, where Mayor Steve Benjamin declared August 8 Charlamagne Tha God day. Check out the Instagram post and teaser for Grow House 420 above.