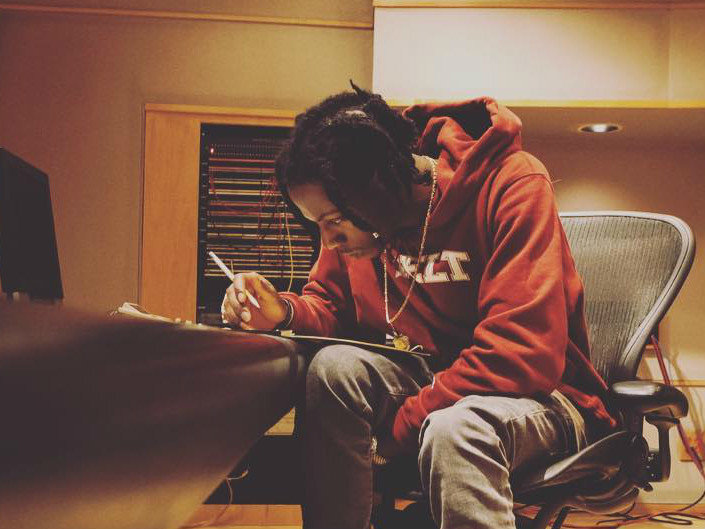 The word “woke” is used a lot these days, but 22-year-old Brooklyn rapper Joey Bada$$ — who recently sparked debate after claiming he could flame 2Pac in a battle — is taking the term to new heights on his latest effort All-Amerikkkan Bada$$. Highly anticipated by his core fan base, and a great consolation prize for those who were disappointed Kendrick Lamar didn’t deliver on something he never actually promised anyways, the album is just as great as we collectively imagined it would be. Kendrick’s delay was probably a blessing, as the album is soaking up every bit of shine it deserves.

Cover to cover it’s packed with scorching political commentary. In many ways, it makes a statement. From the album title right down to the tracklist — which deliberately appears in all caps — this is Joey asserting his status as the leader of the millennial revolution. It’s a timely collection of anti-establishment anthems that anyone who considers themselves keeping it real should play on repeat. Also, it’s almost entirely self-produced, which is super impressive.

Just how woke is Joey you ask? Here are 10 of the most conscious and socio-political quotes from the project. If you haven’t already, you can stream it now.

“Now, what’s freedom to you? Let’s talk about it, take a minute, think it through/I’m all about it, but the concept seems new/The coppers still shoot us down on Channel 5 news/Lock us up for anythin’ we do to pay dues/ Some of us woke while some stay snoozed.”

“They don’t wanna see you fly, they just gonna shoot your wings/Everything ain’t what it seem: Wishin’ all these dirty cops, would come clean/Still swervin’ on these city blocks, for one thing/My man just copped a 30 shot, protect the team, know what I mean?”

“Tell me how we gon’ make a livin’/Hustle on the block, who gon’ save the children?/Man it’s all a plot and I’m just revealin’/The media just tryna make a villain.”

“LAND OF THE FREE”

“Sometimes I speak and I feel like it ain’t my words/Like I’m just a vessel channeling inside this universe/I feel my ancestors unrested inside of me/It’s like they want me to shoot my chance in changing society.”

“Know it must hurt for you to see me evolve/Why you gotta kick me down on all fours?/Why you can’t stand to see me stand tall?/Tell me why we got a war?/Why we gotta fight? Why we always gotta spar for?”

“Time is running up, feel the burn in my gut/And if you got the guts, scream, ‘Fuck Donald Trump’/We don’t give a fuck, never had one to give/Never will forget, probably never will forgive/Uh, I guess that’s just how it is/And they still won’t let the black man live.”

“Call me the general, pushing that new agenda through/For my millennials, troubled youth and the felons too/Tryna be perennial, but chance of livin’ is minimal/She critical, exactly what made my niggas criminals.”

“Fifty years later, still see my brothers choked to death/R.I.P. to Eric Garner, only right I show respect/Nowaday they hangin’ us by a different tree/Branches of the government, I can name all three/Judicial, legislative and executive/Lock your pops away, your moms, then next the kids/It’s all consecutive.”

“It’s clear we livin’ in hell, the life of a black male/Right out the womb, you come out, and it’s a bunch of blackmail/Just waitin’ for you to fail, a special room in the jail/With your name, a number on it so you property now/I see it properly now, it’s what the poverty ’bout/It’s all a game of Monopoly, tryna cop me a house/An elephant in the room until I fit in my tomb.”

“And they judgin’ just because my skin color is brown/And for that, they wanna leave me dead in the ground/And have the nerve to blame it all on my background/Sorry white Amerikkka, but I’m about to black out.”