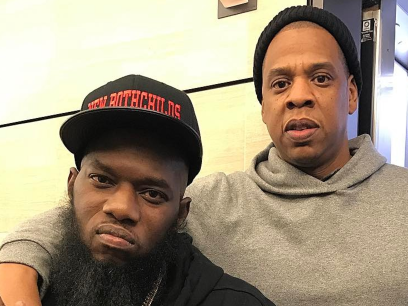 New York City, NY – During Roc-A-Fella Records’ meteoric rise in the early 2000s, Philadelphia rapper Freeway was an invaluable member of Jay Z’s squad and the imprint’s adjacent label, State Property, which was spearheaded by Beanie Sigel. Despite his gruff appearance and unorthodox delivery and vocals, his debut album — 2003’s Philadelphia Freeway — earned him a gold plaque, and after the dissolution of the OG Roc, he released well-respected works such as The Stimulus Package with Jake One in 2010.

Whether it’s history repeating itself or coming full circle, it appears Freeway will be back underneath the tutelage of Jay Z as he posted a series of Instagram flicks that allude that he signed with Roc Nation.

“2017 should be a Great year!!” Philly Freezer captioned in a picture with Jigga, accented with ?? ? emojis. Another solo photo-op depicted the 38-year-old MC born Leslie Pridgen in a room he geotagged with Roc Nation HQ and hashtagged with “roc4life.”

It could mean anything, right? Requests for clarity to Roc Nation weren’t immediately returned as of press time.

Even with his post-Roc-A-Fella independent success, the road to remain a rap star hasn’t been easy for Freeway. In September 2015, he quietly battled kidney failure before undergoing emergency surgery and opening up about the dialysis treatments the following spring.

Before the ball dropped on 2016 to bring in the current year, he shared an Instagram inspirational message to fans by writing, “Don’t give up. There are too many nay-sayers out there who will try to discourage you. Don’t listen to them. The only one who can make you give up is yourself.”