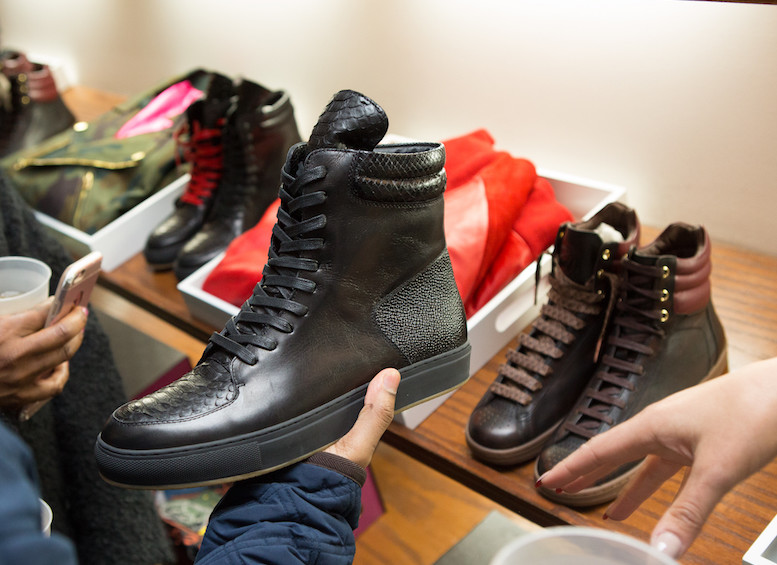 Some see perseverance as a call to action. One that is dedicated to a victorious getback after the game of life hurls some unforeseen drama your way. Others may view perseverance as a response, both unfortunate and burdensome in nature.

The side of the spectrum with which your ideologies align is a determining factor in how you navigate life. Winners, losers, et al.

Enter Brandon and Margaret Williamson, co-owners of PRSVR (short for persevere), a Chicago-based clothing brand and retail space with roots deeply entrenched in the Midwest. (Brandon is a proud product of Detroit, while Margaret boasts Indianapolis lineage.) Founded in 2002, the lifestyle brand’s mission is “To Elevate, Enhance, and Educate through Fashion and Philanthropy”; its function is to outfit the entire family in a range of luxury footwear and apparel echoing the sentiments of ‘90s era Hip Hop–the most affluent era–with modernized silhouettes.

For The Culture: Brandon and Margaret Williamson donate to Chicago’s Dream On Education for every Barney Boot sold.

Brandon designs with the fervor of a Motor City native, anchored by self-confidence in his personal style and willingness to take his clothing’s looks to uncharted spaces of creativity. In a way, he crafts his product as an homage to Chicago’s unsung status of being a beacon in fashion. This can be seen in pieces like the camouflage trench coat and leather-clad Leatherman, a boisterous red ode to the letterman jacket.

With plans for business expansion, the couple tested PRSVR in the New York City market via a pop-up shop at the AGLIT Italy Store, located at 3 Great Jones Street in the fashion-centric SoHo neighborhood.

Brandon and Margaret approached guests and media with humility and warmth, greeting everyone individually and answering any question asked. The kind of inviting attitude New Yorkers aren’t accustomed to receiving during most retail experiences.

For the Williamsons, PRSVR only comes second to their two beautiful growing boys, their greatest gift, and undoubtedly a driving force in their grandiose plans to grow the family business and improve its functionality.

HipHopDX checked in with Brandon and Margaret at their pop-up to get a better understating of PRSVR’s business and how they foresee its future.

“The passion, resilience, sacrifice, values, and respect (the acronym for PRSVR) were so important because those were the things we feel you need in order to persevere,” he explained. “The family structure and providing for the rest of the family came two-fold from our clients wanting to get items for their girlfriend if they’re bringing their girl to the store and they can’t get anything.”

Margaret chimed in, “And before that, I think when [Brandon] had the vision for the line, it was men’s stuff and I wanted pieces too. I won’t lie and sugarcoat it, it was me like, ‘Hey, what about me,’ situation.”

As products Detroit and Indianapolis respectively, it is revealed that the conscious decision to set up shop in Chicago was an intentional one.

“I think Chicago has the most fashionable people in the world,” Brandon proclaims. “And not because the style is just Midwest; Chicago is a very big city, but we don’t have a Rick Owens store or the Buscemi store. Those stores aren’t there, yet we still make really good due without those things and we also influence the culture so much. The slang is started in Chicago, a lot of the styles of music are done in Chicago. Since we don’t have the media ability to push those things out, we’re kind of doing it for ourselves.

The Drill Rap stuff, all of those things happen in Chicago. But we don’t have the ability to make those things bigger, so a lot of times they’ll steal your style. Those things happen. But we still are so fortunate to be involved in it, because it is a major city, so you can get that support locally and not have to run to New York City.”

Chicago’s fashion scene offers options for high-end goods such as Saint Alfred and RSVP Gallery, even if they aren’t exclusively brands of the store. So what gives PRSVR the competitive advantage in their respective market? Margaret has an idea.

“What sets us apart is when you name some of the big streetwear stores, that’s what they are–stores,” she explained. “They’re carrying multiple brands, multiple things. Looking to Ralph Lauren and some of these other major brands for inspiration, we said let’s show people that we can do it too and we can have our own branded store. The store supports the brand; the brand is the store. We don’t carry any products aside from PRSVR.”

Nicki Minaj, Kevin Durant and a host of other celebs have all been spotted wearing PRSVR. But who’s a famous face the Williamsons would like to wear your brand who hasn’t already? Your first guesses are probably right on the money.

“From a personal standpoint [my pick] would be Nas,” Brandon admits. “I would love to see Nas wear my clothes, but from a truly business aspect, I’d say Jay Z.”

And when there’s smoke, there’s fire.

“Mine, of course, is super cliché, but you always want to see Jay, Beyonce, Blue [Ivy], and now the twins,” Margaret said. “They really represent that new school family, and that’s who we’re talking to. You see these dads who don’t look like dads anymore. You don’t have to wear Dockers and button-ups. You can be who you are and who you were. You can continue that on, and those are who we make our clothing for. To be able to see PRSVR on a family on that level would be amazing.”

Brandon then summarized his brand’s ascension to the top perfectly.

“Anyone that we’ve had real relationships with reached out to us. We didn’t go and DM a million people to say, ‘hey, wear my stuff,’ because at our price point especially it seems like we’re just trying to give product away. The key to it is get hot. You have to make something that you feel is special, and then seek out who you feel matches [your brand], and when they come along match it up. If they don’t match up… we get a lot of inquiries and contacts about people and things we wouldn’t want to affiliate with, so we can’t do it. Even if they have 10 million followers, if I do this move, my next move won’t be able to be made. So you have to keep your integrity.”