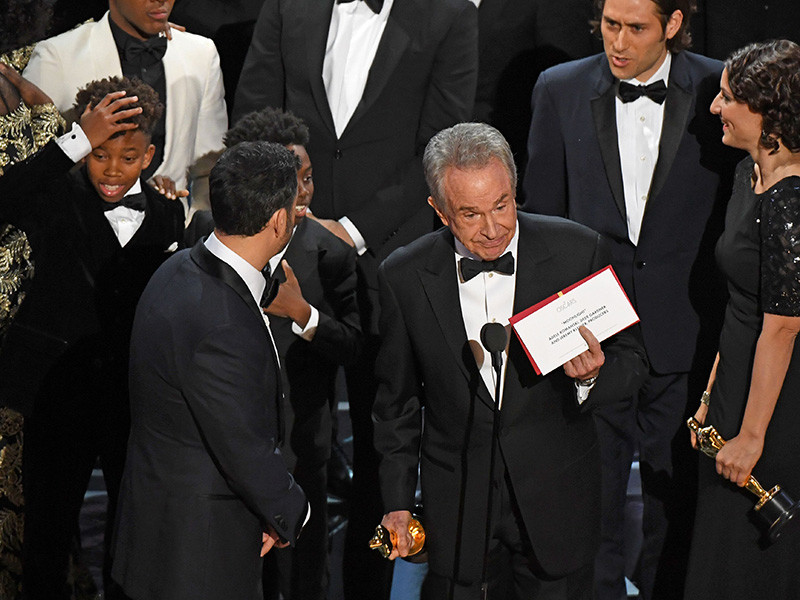 As the La La Land cast and crew began to deliver their victory speeches, an interruption occurred somewhere in the back of the crowd and it was announced that the prestigious award had actually gone to Moonlight, which had won Best Adapted Screenplay earlier in the evening.

Confusion spread through the stage as host Jimmy Kimmel was forced to assure the Moonlight crew that it wasn’t a joke or a stunt (he later jokingly blamed Steve Harvey; a reference to his infamous Miss Universe disaster), beckoning them onto the stage. Beatty briefly took the microphone to explain that when he opened his envelope, the card read “Emma Stone — La La Land,” thus prompting his and Dunaway’s announcement. Emma Stone had won Best Actress in the previous presentation.

Madness aside, the win capped a magnificent evening for Moonlight, wherein actor Mahershala Ali became the first-ever Muslim to win an Oscar when he took the title of Best Supporting Actor.

In his acceptance speech, Mahershala Ali paid tribute to the characters in "Moonlight" #Oscars https://t.co/nBMT6E5Hd6 pic.twitter.com/7qNGWxpVjN

Since the ceremony ended the internet has exploded, settling somewhere in the space between jubilation and not knowing what the hell just happened.

Here’s the moment that it all went nuts on the Oscars stage tonight:

'La La Land' producer: "There's a mistake. 'Moonlight', you guys won Best Picture. This is not a joke." #Oscars pic.twitter.com/vl9PzgBaVW

Watching the #Oscars producers slowly tell the #LaLaLand team they didn't win Best Picture is WILD. Keep your eyes on the background pic.twitter.com/3TRUWZAMjH

And of course, Twitter reacted with its trademark savagery…

I wrote the ending of the academy awards 2017. @jimmykimmel we really got them!

And the Academy Award for Best Picture goes too… pic.twitter.com/iS9jTutURd

Upon further review, the Best Picture winner is Gary from Chicago pic.twitter.com/PJfOZa5piu

Leo put the card back in the envelope. Left the stage with it. He must've given it to a producer who accidentally gave it to Beatty #Oscars pic.twitter.com/HZimvPml45

YOOOOO THE SEASON FINALE OF BLACK HISTORY MONTH IS SO LIT

In amongst the celebrations of anyone who is Team Moonlight, the La La Land crew and cast appeared to be devastated, still consoling each other in the theater a half an hour after the show had been brought to a close.

Heads are gonna roll. You couldn't have a worse possible f-up if you tried. Team LLL still consoling each other in theater. pic.twitter.com/UUr6dlKF9S