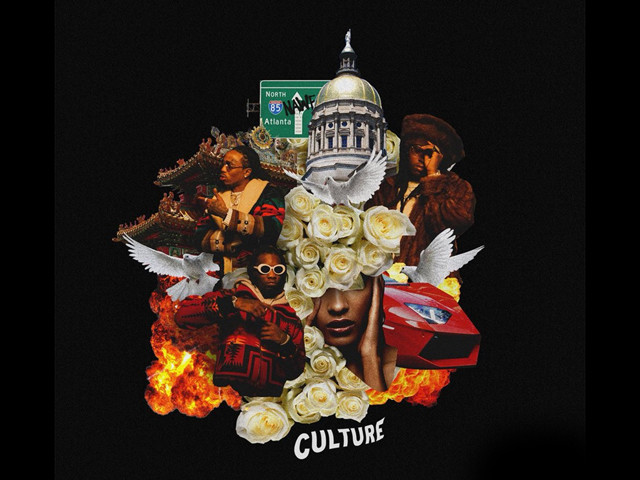 Migos' "Culture" Art Explained By The Graphic Designer Who Made It

“Bad and Boujee” wasn’t only Migos’ first Billboard #1 single — it also transitioned the trio from Atlanta trap staple to mainstream crossover success. Featured on the sophomore album Culture, Quavo, Offset and Takeoff’s breakout hit also introduced a new design aesthetic that seemed sleeker and stranger than the grandiose work of their previous efforts.

The guy responsible for the work, Stole “Moab” Stojmenov, is a 20-year-old Italian graphic designer whose first big project stateside was the cover for Westside Gunn’s There’s God And There’s Flygod, Praise Both.

Having grown up drawing comic book characters and listening to his father play everything from jazz to heavy metal, Moab mentions loving the link between album covers and the music they went with. He was 16 by the time he discovered Hip Hop, spraying graffiti wherever he could before blending in his appreciation for baroque art.

HipHopDX got a bit of time with the designer over Facebook, where Moab explained how he connected with Migos to create the Culture cover and exactly how Italian rap heads feel about the trio.

HipHopDX: How exactly did the connection between you and Migos eventually lead to you handling the cover art for Culture?

Moab: My first contact with Migos was last summer and directly with Quavo. He saw some of my works on Instagram and asked to work together. We started working on some singles that were on streaming on SoundCloud when Culture wasn’t planned yet and we took some time to find the perfect balance between my artworks and the music until September when Migos announced their second official album and Quavo introduced me to the 300 Entertainment and Quality Control team, with whom I worked for the complete design of the album.

DX: There’s a mix of Migos’ Atlanta heritage alongside various international touches. What exactly were you guys trying to achieve aesthetically?

Moab: Well, the only guidelines Quavo gave me were about what I had to symbolize on the cover. We had to represent Migos’ past but also, what they gave to Hip Hop culture, Atlanta and how they stepped up the rap game. Aesthetically, I had complete authority on the work. Quavo trusted me and since our first works together, he liked my vision and my way of doing things. I wanted to condense all the different and various images Quavo gave me in one single powerful image. At the same time, I didn’t want it to seem chaotic and difficult to understand. I think Culture is a very important step in Migos’ career and musical production. We needed to represent this and make clear that they contributed a lot to the improvement of American rap and Hip Hop culture.

DX: You also did the cover for their biggest single to date “Bad and Boujeee” alongside “T-Shirt.” Did they set the tone for what you wanted to do with the actual album cover?

Moab: “Bad and Boujee” was one of the first artworks I did for Migos and it was first released in August when Culture wasn’t planned yet. The artworks of Culture and “Bad and Boujee” are very different because of that. In fact, it was featured later in the album and became its first official single in October when it was released on Apple Music, iTunes, etc. We decided to keep the first cover but, of course, it helped find the balance between artwork and music at the beginning of our collaboration even though the following covers were totally different.

DX: In your opinion, how responsive are Italian rap heads to Migos?

Moab: Migos are famous worldwide and are respected and loved here but just like in the U.S., here in Italy, not everyone appreciates and understands this type of rap. Culture is already a classic everywhere, I mean, whoever likes the genre has to love this album. In this particular case, Culture had a great media impact here because of my collaboration too. People had the chance to appreciate the project even more.