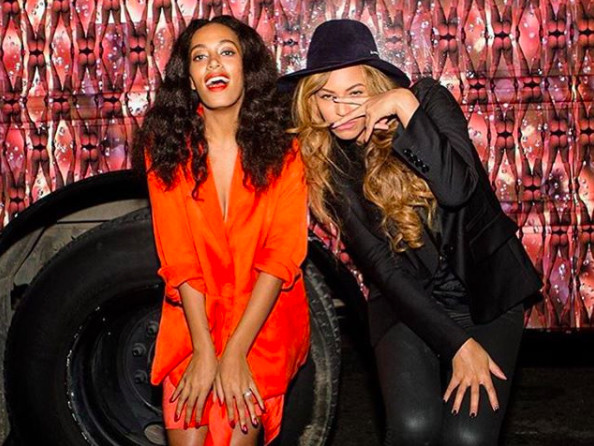 Solange Knowles executed one of the most intriguing albums of 2016 with A Seat At The Table.  It was bursting with raw emotion and tender observations on everything from personal insecurities to female empowerment. As little sister to one of the most high-profile pop stars in the world, Beyoncé, she’s somehow managed to step out of Queen Bey’s eclipsing shadow to assert herself as another strong female voice in the music industry.

In an exclusive conversation for Interview Magazine that was published on Tuesday (January 10), big sister sat down with little sister to discuss her three-year creative process while writing the album, being influenced by Missy Elliot and why they both admire Master P, who they agree reminds them of their father.

“I remember reading or hearing things about Master P that reminded me so much of Dad growing up,” Solange said. “And they also have an incredible amount of love and respect for one another. And I wanted a voice throughout the record that represented empowerment and independence, the voice of someone who never gave in, even when it was easy to lose sight of everything that he built, someone invested in black people, invested in our community and our storytelling, in empowering his people. You and I were raised being told not to take the first thing that came our way, to build our own platforms, our own spaces, if they weren’t available to us. And I think that he is such a powerful example of that.”

Toward the end of the interview, Solange opens up about her vulnerability ahead of unveiling A Seat At The Table, admitting that during the week before its release, she was a nervous wreck. When it was finally out there, however, it was a transformative experience for countless women, something she’s reveling in.

“I was breaking out into hives,” she said. “I could not sit still. It was terrifying. This was going to be such an intimate, up-close, staring-you-right-in-the-face experience, the way people would see me and hear me. It was one thing to make the record and have those reservations; it was another to finish it and actually share it. I just feel so much joy and gratitude that people have connected to it in this way. The biggest reward that I could ever get is seeing women, especially black women, talk about what this album has done, the solace it has given them.”

Throughout the conversation, it’s clear Solange greatly admires her sister and has taken several lessons from her, which she consistently applies to all areas of her life. The bond between the two talented songstresses is something that is undeniably unbreakable.