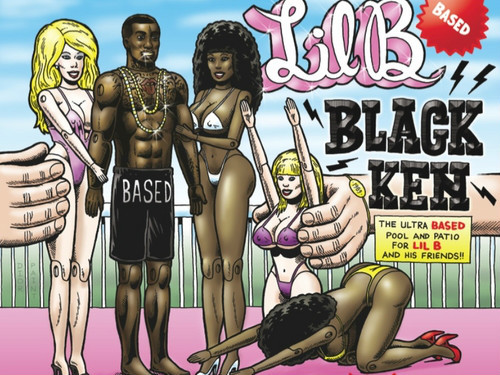 Will Lil B Let Martin Shkreli Get His Hands On "Black Ken" Mixtape?

Lil B has revived the possibility of releasing his Black Ken mixtape. The project was first teased in 2010 when the BasedGod released the cover art and a 26-track sample of the mixtape.

But since then, news of Black Ken has been quiet (unless you count Jay Z dressing up as the doll for Halloween this year) until Lil B brought up the project the other day on Twitter.

Martin Shkreli — owner of the one-of-a-kind Wu-Tang Clan album that he bought for $2 million — chimed in and asked how he can get his hands on the Black Ken mixtape. Lil B welcomed the pharmaceutical exec with open arms and said they will be in contact.

So the hype is pretty big for Black Ken.

Lil B’s last release was the collaborative Free Based Freestyles with Chance The Rapper. He’s kept himself busy speaking at various universities and managing the BasedGod Curse.

Check out the full cover art for Lil B’s Black Ken mixtape below.