Nas Shows Off Skills During Game Of "Name That Famous Celebrity" 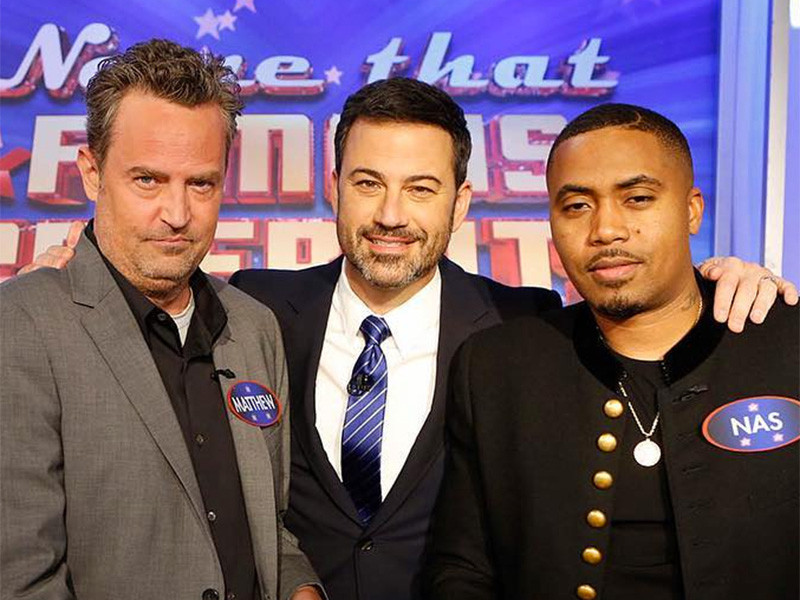 While Nas is most well-known for his skills on the mic, it turns out that the Queensbridge spitter is also well-versed in celebrity trivia.

During an appearance on Jimmy Kimmel Live!, Nas crushed fellow competitor Matthew Perry in a game of “Name That Famous Celebrity.”

For the game both Nas and Perry were blindfolded and given verbal hints from “Jimmy Kimmel Live!” regular Yehya.

With hints like “the guy who do the cowboy movie” and “comedian guy,” the New York City lyricist quickly offered up the correct answers to three hints, and subsequently took home the win. Clint Eastwood, Chris Rock, and Pharrell Williams were among the celebrities Nas correctly guessed.

Nas also sat for an interview with Kimmel, explaining why it’s been almost five years since his last album.

“I gotta live life. I gotta experience things,” he explained. “Sometimes music can shift society. Not even talking about me. We making some music out there that the world can hear now. When I first started out I didn’t know this thing would be so global. Things have changed and music has changed.”

He said ultimately that the music has to come with the right inspiration.

Later in the show, Nas hit the stage to perform alongside Dallas singer Erykah Badu.

Nas’ appearance on the late night talk show comes the same week the rapper was honored with his own mural in Queensbridge. Havoc of Mobb Deep was among those who shared an image of the musician’s mural on social media.

#Queensbridge they just gave a long time friend from the hood a mural! He earned every last bit of that! @nas

Watch video of Nas and Matthew Perry’s game of “Name That Famous Celebrity” below.