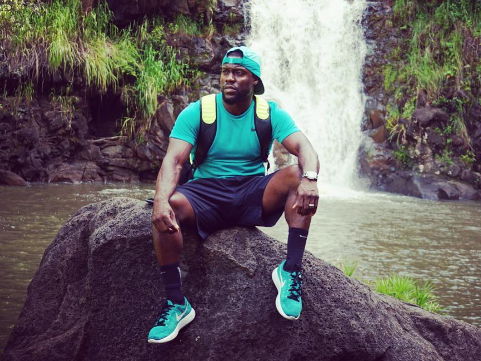 Ever since entering the music business, Kevin Hart’s rapping alter ego Chocolate Droppa has been causing a stir. After signing with Motown Records last month, Droppa took aim at Drake, Jay Z, 2 Chainz and Future in a freestyle in front of the Capitol Records building in Hollywood.

Now, in a newly published interview with Rap-Up, Droppa explains why he decided to go after these rap heavyweights.

“I mean, look, if you’re going to give everybody attention, you gotta go straight for the head on a snake before you go for the body where the babies at,” he says. “You understand what I’m saying? When you cut off the head, then the babies ain’t gonna have no place to go and talk to they mama. So, my thing was, cut off the head so people don’t have no mama. These rappers look at these other rappers as their mama. That’s why they be catering to these other rappers. I’m not that guy. I’m different. You know what I’m saying? I don’t need no mama. I’m comin’ out, I’m smackin’ everybody on the hand, saying, ‘Hey! Get ya hand out that pot. That’s my food. Don’t touch that cookie. That’s my cookie. Hey, hey. Don’t you goddamn put that cookie in your mouth ’cause I was gonna eat that cookie!’ That’s me basically saying, in a long story short, that I’m ready. I’m ready for whatever they got. That’s why I come at these people’s necks. It don’t matter to me, man. I’m a different dude. I’m an alien.”

Elsewhere in the interview, Droppa claims that Lil Wayne stole “A Milli” off him, adapting it from his original song, “A Philly.” He also revealed that it “ain’t all love” when he sees T-Pain following the pair’s battle a few years back.

“I mean, if we see each other, it ain’t all love,” he explains. I’m not breaking my neck to go get to him, but I feel like if he wanted to come to make sure that we’re straight, he can come and do that, but I’m not gonna go out and extend that hand after I’m fresh off a destroy. You gotta come and you gotta put that stuff on your voice and you gotta be like, ‘Are we cool?’ But you gotta do that in Auto-Tune.”

Earlier this month, Droppa released his latest single “Baller Alert,” featuring Migos and TIP, artists he believes can learn a thing or two from him.

“You’re looking at two real hot up-and-coming cats, man,” Droppa says, referencing T.I. and Migos. “When I look at T.I., I’m like, ‘He got a bright future ahead of him. This guy got something. There’s a lot of potential there. I need to work with this cat.’ He’s a young cat in the business and it’s cool to get with those guys and point them in a good direction. I felt that this was a good thing for him. Migos, he got that energy. I remember myself when I was at his point and T.I.’s point. I can put myself in both they shoes when I was there. Now, that I sit on the throne where I’m at, I said, ‘Let me go back and show some love. Let me go back and do what people didn’t do for me.’”