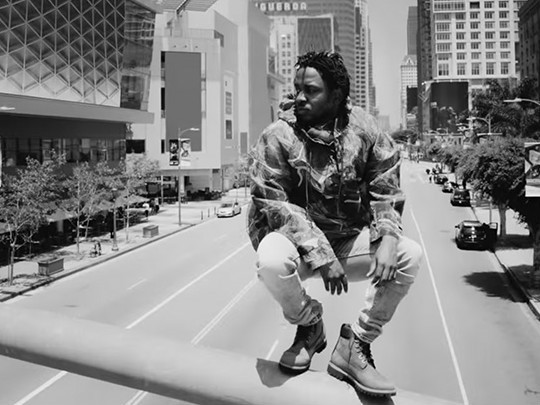 Kendrick Lamar released what many, including HipHopDX, considered to be the best album of 2015 with To Pimp A Butterfly.

He since released the untitled unmastered. project and dropped a stellar verse on fellow TDE labelmate Isaiah Rashad’s The Sun’s Tirade.

“It’s about just being an individual and loving everything you do,” Martin says of the differences in sound between Kendrick albums. “There was no pressure from no label or nobody. We did a good kid, m.A.A.d city, we turned around and did a To Pimp A Butterfly. And we’re gonna do a third one.”

Martin says there’s no pressure for To Pimp A Butterfly‘s follow-up because they are confident in blending their musical tastes. From radio-ready “Swimming Pools” to the jazzier cuts on TPAB, the process has always been the same.

“We love trap,” Martin says. “We love all that. It ain’t just about jazz or funk artists or that. One thing that I want to say and I’ll always say is, I’m not in that box. Get out the box.”

He also emphasizes that the purpose of the music is not to impress anyone or to get radio play or chart positions. Lamar and Martin understand the need for survival after growing up in inner city Los Angeles, and they make music to bring hope to the hopeless.

“We are from a place where impressing the next person is irrelevant,” he says. “Getting up, being able to make it back home from school is the goal. Gettin’ up, trying to find some way to be happy when everybody else got Jordans on and new clothes on and you gotta borrow your brothers’ and sisters’, we do music for them. We do music for the person that’s contemplating suicide. I’ll say it again, we do music for them, for the struggling, for the person that’s in jail with no way out. We make them feel good. We do music for the person that maybe can’t afford to buy a CD or come out to a jazz show or can’t get to the Montreal Jazz Festival. We’re doing it for them. That’s all we do it for is them, the people that understand struggle. If you like it in the process, then beautiful. But we’re trying to heal things. We’re trying and help things. So when we do an album like good kid, m.A.A.d. city, and we do ‘If Pirus and Crips all got along,’ because you know why? If Pirus and Crips really got along, we’d be good. And that kind of music, ‘Yawk, yawk, yawk, yawk, man down,’ we go to the club, we get turnt up, we on one.”