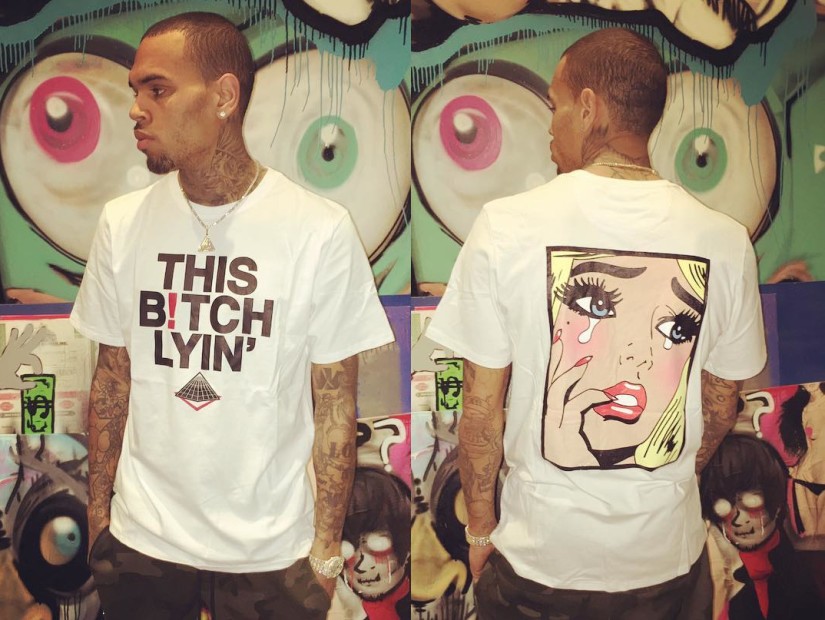 Los Angeles, Ca – Capitalizing off the Baylee Curran drama, Chris Brown has taken his pain and turned it into a monetary opportunity by selling T-shirts printed with “THIS B!TCH LYIN'” on the front and a pop-art print of a blonde-haired girl crying on the back.

The first batch of the tees, up for sale on Chris’ Black Pyramid Clothing retail site for $38 a pop, sold out within minutes, but fans can still be pre-order future shipments.

Earlier this month, Baylee made allegations that the 27-year-old R&B singer pulled out a gun and threatened her for “admiring” a piece of jewelry. After being kicked out of Brown’s Tarzana home, the former beauty pageant winner called the police and told them that he had threatened her so the whole Los Angeles Police Department SWAT team came out to his mansion and took him to jail.

Chris was quickly released on a $250k bail. Ironically, Curran has a history of stealing, lying and filing wrongful police reports on old friends and past roommates.

“The Grass Is Greener” crooner took the high road in this situation and decided to turn the other cheek. And now, he’s selling t-shirts.

More looks at the “THIS B!TCH LYIN'” Chris Brown T-shirt are below.