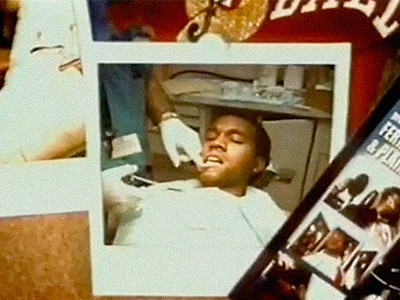 The Internet – After riding the boards for quite some time, Kanye West burst onto the rap scene with “Through The Wire,” a song he literally performed with his jaw wired shut after being severely injured in a car accident in 2002. The cut was included on his debut album, 2004’s College Dropout.

Twitter did what Twitter does today by claiming that the whole story was fake and that Yeezy had actually gotten into a fistfight and that’s how he broke his jaw.

Some took the story and ran with it, questioning the validity of West’s original story.

And what's crazy is Kanye still got the world thinking he was in a bad car accident October 2002?all Im'a say is come to Chicagoland and ask

Bruh so Kanye stole the Jesus Walks beat, got his ass beat for doing it, then lied when about it when he dropped Through The Wire?

So y'all mean to tell me Chicago folk knew Kanye wasn't in no accident but was beat up, yet get upset when Ye doesn't come back to Chicago?

"Ye, is it true you got beat down in Chicago in October 2002 and used "Through the Wire" to cover it up?"

I mean, I love the song Through The Wire, but it is a little bizarre to only 'break your jaw' in a horrific car accident…

FakeshoreDrive’s Andrew Barber reminds the world wide web of a story from 2010 where West was in a physical confrontation before becoming the ‘Ye he is today. This doesn’t mean the car accident didn’t happen.

the internets have a short memory pic.twitter.com/HRiq8iIibW

Others said ‘Ye’s claims are Gospel and blast those trying to craft a conspiracy theory.

The people saying Through the Wire is fake and asking how your jaw gets injured in a car accident have never been in an actual car accident.

"Through the Wire was a lie! Kanye was never in an accident!"

Me finding out "Through The Wire" was all a big lie pic.twitter.com/2VJHWYz7d6

Tay Swift def did this: https://t.co/yqrbzKoJrw

Through The Wire one if the realest songs ever. Too much proof behind what happened. If Ye lied, it surely that would've surfaced years ago

I refuse to believe that Through The Wire is fake

KANYE PUT PICTURES OF HIMSELF WITH HIS FACE SWOLLEN IN THE HOSPITAL IN THE "THROUGH THE WIRE" VIDEO BUT YALL ACTING LIKE HE LIED BOUT IT???

Spin found the lawsuit that was filed against Kanye and others by another man who was reportedly injured in the car crash. The publication also points out that the rapper was hospitalized in Los Angeles, not the Windy City as the conspirators are saying.

West doubters had extra reason to come at the Life of Pablo creator after Kid Cudi put him and Drake on blast yesterday, claiming they do not give him enough credit. ‘Ye promptly responded at the Tampa stop of his Saint Pablo tour, telling the former G.O.O.D. Music signee “I birthed you!”

Watch Kanye West’s classic “Through The Wire” music video below.