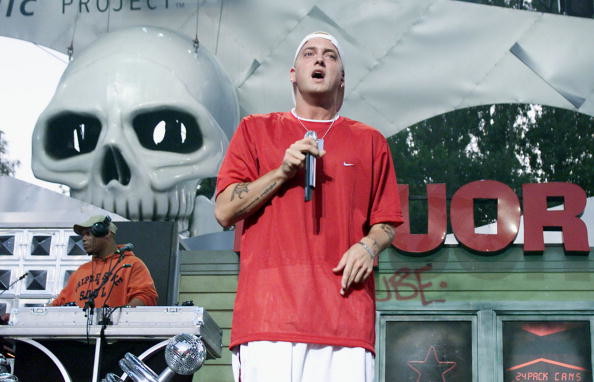 Eminem's Ex-Bodyguard Claims He Could've Killed Him In Armed Standoff

Los Angeles, CA – Eminem is probably due for a more reality based biopic this side of 8 Mile in lieu of all these allegations of his past dealings with his former bodyguard, Byron “Big Naz” Williams.

About a month ago, Williams retold a story where Dr. Dre-nemesis Suge Knight ordered the wolves on Slim Shady during the 2001 Source Awards (a hit that Williams claimed to have thwarted himself with the help of Dre’s muscle). Now in his latest segment on the Murder Master Music Show, Williams says that the “former bodyguard” tagline on his résumé came as a direct result from a ghetto quick-draw standoff the two engaged in — with loaded firearms.

Williams made it clear that he didn’t want to retell the entire altercation because everything was included in his book, Shady Bizzness: Life As Marshall Mathers’ Bodyguard In An Industry Of Paper Gangsters, an endeavor he’s still looking to earn some monetary gain from 16 years after the fact. But he did reveal something along the lines that Slim Shady wasn’t exactly forthcoming with the money he owed. Allegedly.

“It was about the money! It started off as a misunderstanding and it ended up being about money after a resignation and then it got ugly,” he continued.

It’s not until the tail end of the interview that the hired henchman claims self-defense, alleging that it was Eminem who initially flashed his chrome, prompting Williams to do the same.

“The day him and I met [my gun] was definitely loaded, I didn’t have any intentions on trying to do anything to him but I knew how this guy could be, and I was trying to get my money. I was trying to do it in a peaceful manner and he was the first one to draw. The question I always ask myself is was it loaded? I know mines was!… I had to be the bigger person — and I always been the bigger person within that entire camp. I told him ‘I loved you like a brother, and it didn’t have to come down to this, but we’ll handle it in a different way.’ I was heated, man. And he knew that he had crossed the line. And even then, and all of that, I still forgave him.

Although, as quick as I forgave him, I could have took him outta here.”

No explanation needed as to what “took him outta here” entails. Williams predicted even with claiming self-defense, he would have been convicted in some form or fashion because Eminem was “the golden boy of Hip Hop.”

As for the aforementioned tell-all book, Williams says Hollywood royalty such as Ron Howard and Danny DeVito have both approached him in hopes to spin it into a motion picture.

Listen to Williams’ latest interview down below.