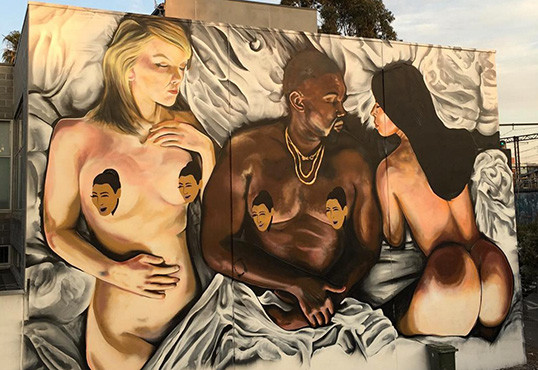 The sign boasts an image of Yeezy in between Taylor Swift and Kim Kardashian. The work is being credited to street artist lushsux, who was seemingly caught in action in an Instagram post.

The mural was given an update as the artist added crying Kim memes as nipple covers, not only for Swift, but also for West. Kim’s assets remain visible for all.

“It was made ‘family friendly’ last night,” lushsux told the Sydney Morning Herald. “It seems people are actually more offended that it has been censored then by it being in its original uncensored form.”

Another huge Kanye mural appeared in nearby Australian city, Sydney. This one, entitled “Kanye Loves Kanye” showed the rapper kissing himself. Ye’s team reportedly paid artist Scott Marsh a pretty decent amount of money for him to take it down.