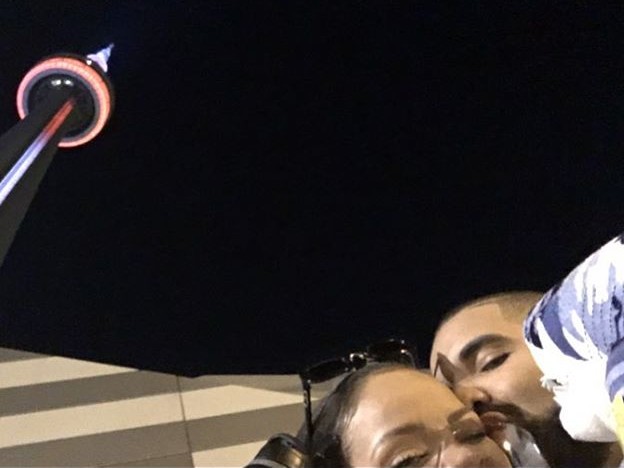 Rihanna Got A Tattoo Just For Drake?

Miami, FL – Looks like Rihanna got a tattoo for Drake after his “Summer Sixteen Tour” show in Miami, according to TMZ.

They both got tatted by celebrity tattoo artist Keith “Bang Bang” McCurdy, with the  “Needed Me” singer reportedly getting a little shark tattoo on her ankle to symbolize a date they had earlier in the month when Drake took her to the aquarium in Toronto.

The VIEWS rapper supposedly bought RiRi her very own stuffed shark that she was seen carrying around in her bag when the pair were caught holding hands in Miami.

Rumors fueled of an Aubrih relationship when Drake dedicated a whole billboard to Rihanna, congratulating her for receiving the prestigious Video Vanguard Award at this year’s MTV Video Music Awards. Drake presented her with the honor and professed his love for Bajan singer in front of millions of viewers.

The couple then shared their first PDA with a kiss at Drizzy’s Miami stop of the “Summer Sixteen Tour.”

Drake and Rihanna have had a long history of making hits such as 2010’s “What’s My Name” and every other hit they’ve made in between the time “Work” dominated the charts at #1 this year.

Another rapper-friend of Drake’s to pay tribute to the OVO king via ink is Skepta. His tat of choice was the OVO owl on his ribs. Drizzy also honored his friend with a permanent BBK logo on his shoulder.

Check out Rihanna’s tattoo allegedly for Drake below:

The Chicago rapper has evolved with his chart-topping Drake collaboration.