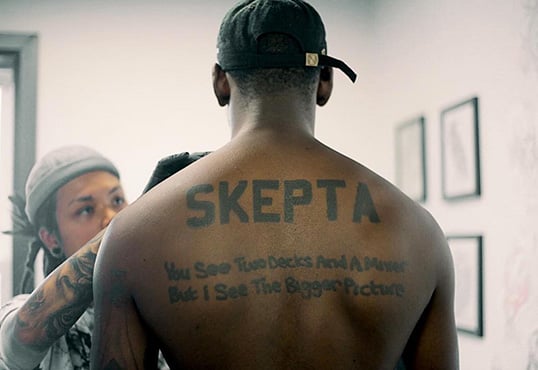 Skepta & Drake Now Have Each Other's Logo Tattooed On Them

U.K. grime rapper Skepta showed his appreciation for OVO this past weekend by getting the brand’s signature owl logo tattooed on himself.

The “Shutdown” MC shared the new art on Instagram, as did Toronto’s Forever Young Ink tattoo parlor where he had it done. OVO boss Drake also re-posted an image of Skepta in the shop to his own IG.

The owl is on Skepta’s ribs just above a tattoo of the iconic Clock Tower at London’s Houses Of Parliament. Skepta also got a new neck tattoo that says “forever.”

All of the space on my skin soon done. @androjeny @fyinktattoos

The new tattoo is just the latest in a long list of public displays of friendship between Skepta and Drake. The two have been quoting, sampling and thanking each other on various releases for the last few years, as well as bringing each other out to perform together at concerts.

In February, Drake even announced that he was “the first Canadian signed to BBK,” although the details of that specific deal have yet to come to light and so far he hasn’t released any music via the imprint.

The first Canadian signed to BBK. Big up my brudda @skeptagram for life yeah. And my section gunners too. ??

Either way, the two artists clearly have a mutual appreciation for each other, and the unity between them is strong.