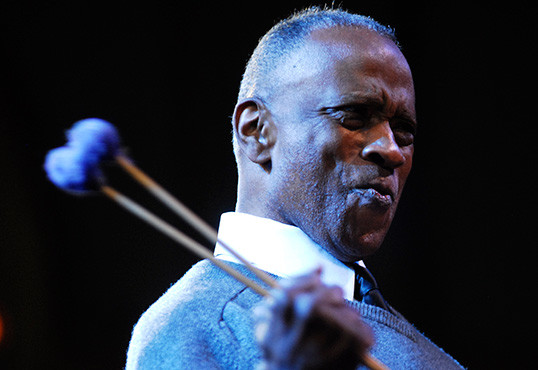 Acclaimed jazz vibraphonist Bobby Hutcherson passed away Monday at the age of 75 at his home in Montara, California, reports The New York Times. A spokesman for the family told the publication that the musician had been dealing with emphysema.

Gaining prominence in the ’60s, Hutcherson is credited with helping to popularize the use of vibraphone in jazz, and is considered one of the instrument’s foremost players. He worked with Blue Note Records throughout his career.

“We’re deeply saddened by the passing of #BobbyHutcherson, the greatest vibraphonist in Blue Note history,” the jazz label wrote in a post on Instagram. Hutcherson released 24 of his more than 40 albums as a bandleader under the imprint before parting ways in 1977, and appeared on Eric Dolphy’s classic Out To Lunch! album for the label in 1964. He returned to Blue Note in 2014 to release the Grammy-nominated Enjoy The View, his final album.

Hutcherson’s music was an influence on Hip Hop and has been sampled on songs by The Game, Ice Cube and Madlib.

Check out some reactions to his death, as well as some of his music and the rap songs it inspired, below.

We're deeply saddened by the passing of #BobbyHutcherson, the greatest vibraphonist in Blue Note history. From the first note he played on a Blue Note record on April 30, 1963 as a sideman on alto saxophonist Jackie McLean's album "One Step Beyond" his sound became synonymous with the label's modern postbop movement throughout the 1960s & later the jazz-funk explorations of the 1970s. Bobby recorded 24 Blue Note albums as a leader & appeared as a sideman on classics including Eric Dolphy "Out to Lunch," Joe Henderson "Mode for Joe," Grant Green "Idle Moments" & Lee Morgan "The Procrastinator." We were proud to bring Bobby home to Blue Note for the Grammy-nominated 2014 album "Enjoy the View" with Joey DeFrancesco, David Sanborn & Billy Hart. Click in the link in our bio to spin our "Intro to Bobby Hutcherson" playlist & celebrate the eternal spirit of a modern jazz legend.

Respect to the master & one of my percussion heroes in jazz music the great Bobby Hutcherson. #Rip #BobbyHutcherson

R.I.P. to Mr. Bobby Hutcherson. "Montara" is such a gorgeous album.

Parts of the title track from his 1975 album Montara were used by Madlib, The Game and The Underachievers.

“Procession” was used on Diamond D’s “This One” featuring Busta Rhymes.

And a version of “Rain Every Thursday” was the backing track to this Nas freestyle from 1993 (around the 2:36 mark).

HipHopDX sends condolences to the family and friends of Bobby Hutcherson.