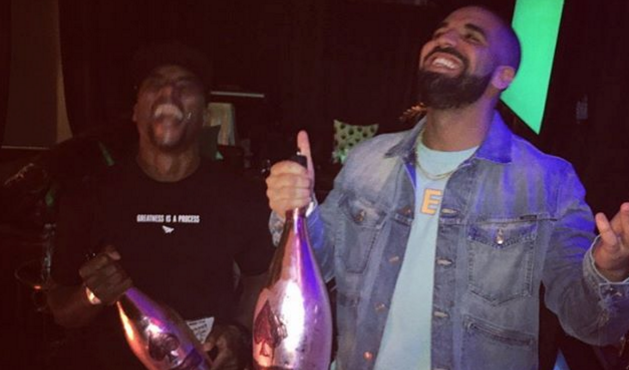 For those who remember, The Breakfast Club member was not only one of the subjects of Drake’s wildly popular Meek Mill diss “Back to Back,” the radio VJ’s inclusion in the song became a literal context when Drake made the lyrics “You gon’ make me step out of my fuckin’ frame/You gon’ make me buy bottles for Charlamagne” a real-life event by actually sending champagne to the offices. Over the years, Charlamagne had been adamant regarding his disdain for Drake’s music but it appears as if he’s warming up to it.

Seeing that the two have a common enemy in Funkmaster Flex, it was only right they celebrate the right way with a pair of $7,000 bottles of Armand de Brignac Rosé 30L Midas champagne.

“History don’t get made unless we make it. Salute @champagnepapi great show tonight,” CThaGod captioned on his photo while Drake offered a “Pretty much sums it up” before thanking his newfound friend for attending the show.

Funk Flex recently went public with the notion that Drake’s ghostwriting leaks came within his OVO Camp, forcing Drake to continuously go on the onslaught against the NYC Hip Hop radio station. There was also something about a Drake/Eminem beef but that spat was confirmed to share the authenticity of a $3 bill.

Ebro has since gone to bat for his station and recently went in on Drake, as he was expected to do.

Check out Drake and Charlamagne getting chummy down below. Stranger things have happened.

History don't get made unless we make it. Salute @champagnepapi great show tonight.