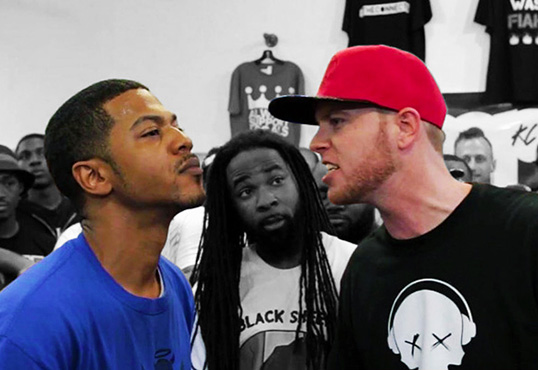 A clash out of Kansas City, Missouri between two hungry up-and-comers has topped BattleRap.com‘s list of the top rap battles released in July. The well-filmed small-room battle features two strong performances from the relatively unknown rappers.

“In an era of widespread uniformity, it’s always worth noting when someone rises through URL’s ranks and sounds truly unique, and Saint Mic is one of those people. Although he’s been making a name with his URL battles, he’s still had time for small league showings, but he evidently doesn’t use it to slack off,” the publication writes.

The site praises Saint Mic, but ultimately calls a victory for Christian battle rapper A. Ward, in what is just his fifth on-camera solo battle.

“He charges through this entire clash with unwavering conviction and a nice mix of complex patterns, jokes, and good old fashioned haymakers. Every round is dead solid, and even though he’s at home, it’s hard not to give him the well-earned W here,” BattleRap.com writes.

Other notable entries on the list include Rum Nitty’s continued ascent into URL’s top tier with what most considered a very clear win over Charlie Clips, the long-anticipated doubles rematch between Tsu Surf/Tay Roc and DNA/K-Shine, and a highly-debated match-up between Bigg K and Showoff.