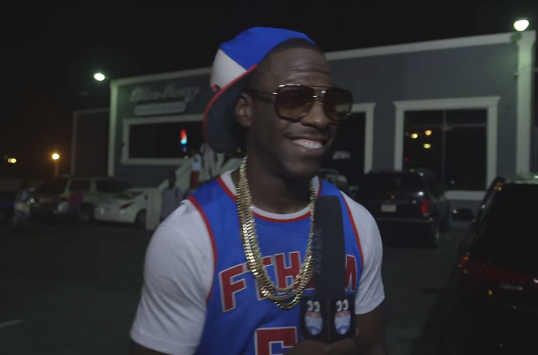 Politics (at least in the general sense) have never been a forte for Young Dro so when DJ Smallz asked the longtime Hustle Gang member his thoughts on the upcoming election, the response was just as unpredictable as his colorful punchlines.

“I’m into politics. I feel good about politics and the way it’s going down. I hope Donald Trump do win,” he said with a smile and lackadaisical “Go Trump!” hand wave.

Unfortunately, the follow-up questions to gauge the validity on such a lofty endorsement weren’t there, as the interview proceeded on to cover topics such as President Obama’s legacy and the ‘ol “If-I-were-ruled-the-world” question.

Just yesterday (July 5), Trump was on top of the headlines doing exactly what he does best —being controversial.

During a rally in Raleigh, North Carolina, the Republican Presidential nominee pulled executed Iraqi dictator Saddam Hussein’s name from out his hat while praising his efforts to conquer evil with evil.

“He was a bad guy — really bad guy. But you know what? He did well? He killed terrorists,” Trump exclaimed. “He did that so good. They didn’t read them the rights. They didn’t talk. They were terrorists. Over. Today, Iraq is Harvard for terrorism.”

The irony of it all is Dro says he’s all about “ending racism” and people “being treated equally,” the very same stances Trump is continuously accused of ignoring.

Dro isn’t one to care about what other people think about him but now might be the time for that “gotcha, bitch!” moment if his comments weren’t meant to be taken seriously. T.I. can certainly give him pointers on that life lesson if need be.

Watch the Polo legend endorse Trump in the streets of ATL down below.