Kanye West Reveals The Meaning Behind His Controversial "Famous" Video 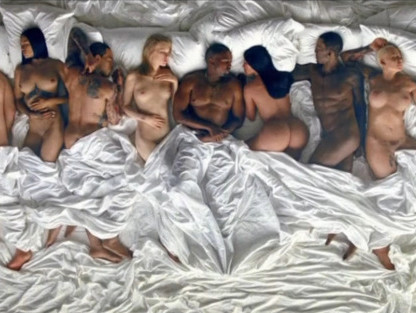 Los Angeles, CA – Kanye West’s “Famous” visual is simply “a comment on fame,” The Life of Pablo rapper exclusively reveals in an interview with Vanity Fair.

Inspired by realest painter Vincent Desiderio, West created a tableau of himself sandwiched between his wife Kim Kardashian and pop singer Taylor Swift, whom he references in the song to her alleged dismay.

West divulged that the celebrities chosen for the “Famous” video had some impact or influence on his journey to fame which included his ex-lovers, industry friends, family and anyone else who has contributed to his controversial trek to celebrity.

“Maybe in some alternative universe me and George Bush could have been friends. I could have been his O.J. Simpson black friend on the golf course,” West says to Vanity Fair.

Credit goes to Matthew Barney, known for his living sculptures in works like The Cremaster Cycle, for helping West bring his vision to life. Yeezus himself referred to Barney as his “Jesus” for lending his assistance.

It was important for Ye to maintain the artistic vibe of the video by ensuring the shots were not so sexualized, despite the salaciousness of the song itself.

“We were very careful with shots that had [something] sexual to take them out,” he says.

Yeezy is also careful to make certain that Kim approves of everything he does. He says that he’s grateful for a wife who allows for him to be himself, describing their life as “walking performance art.”

“A lot of lines other wives would not allow a husband to say,” he says. “But my wife also puts up photos that other husbands wouldn’t let them put up. One of the keys to happiness in our marriage is we’re allowed to be ourselves.”

With all these famous people being depicted in Yeezy‘s latest artistic endeavor, the rapper dares one of them to take him to court.

He tweeted, “Can somebody sue me already #I‘llwait.”