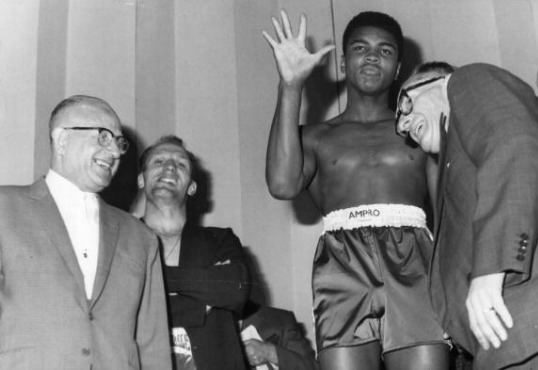 Phoenix, AZ – World heavyweight boxing champion Muhammad Ali has passed away. He was 74.

Yesterday (June 3),  Ali was said to be in grave condition at a Phoenix-area hospital. On Thursday (June 2), it was reported that the boxing great had been hospitalized for respiratory issues and was said to have been in fair condition.

The family spokesman, Bob Gunnell, says that his hospitalization was expected to be a short one.

NBC News reported him to be in grave condition, as family members began to gather at his hospital bed.

Yesterday afternoon, Laila Ali thanked fans for the love and support in a special message on Facebook after her father was hospitalized.

“Thank for all the love and well wishes. I feel your love and appreciate it,” she says.

The boxing legend, born Cassius Clay Jr., had been battling Parkinson’s disease after being diagnosed with the debilitating illness in 1984. Parkinson’s can lead to complications and affect the breathing of patients, according to experts.

A funeral service is planned in his hometown of Louisville, Kentucky.

“I Ain’t Got No Quarrel With Those Viet Cong”

Ali‘s existence went far beyond the title of legendary boxer. He was a civil rights activist and famously anti-war too. In 1967, he publicly refused to draft to the U.S. Army, becoming a conscientious objector to the war in Vietnam. His defiance and religious beliefs as a Muslim saw him stripped of his boxing titles in 1967.

Ali was quoted as saying, “War is against the teachings of the Holy Qur’an. I’m not trying to dodge the draft. We are not supposed to take part in no wars unless declared by Allah or The Messenger. We don’t take part in Christian wars or wars of any unbelievers,” and more famously, “I ain’t got no quarrel with them Viet Cong, no Viet Cong ever called me Nigger.”

Will Smith as Ali

Ali’s philanthropic, God-fearing athleticism played out in the newsroom just as well as it did on the silver screen when Will Smith played him in the Academy Award-nominated film Ali in 2001.

The Michael Mann-directed biopic visualizes Ali’s life as Will Smith recreates moments in the boxer’s life from his match with Sonny Liston to his criticism of the Vietnam war to Rumble in the Jungle.

“He is a perfect actor,” Muhammad Ali said of Will Smith playing him. “I even thought he was me.”

At age 22, Ali was set to knock Sonny Liston off his ranking as the underdog and brashly buzzed, “float like a butterfly, sting like a bee.” It was before this bout in which he recited his “I am the Greatest” poem displaying a kind of infectious confidence among his followers and Black Americans alike.

“This is the legend of Cassius Clay, The most beautiful fighter in the world today.”

Several notable figures within Hip Hop such as The Game, Lil Kim, and Erykah Badu and Future among others in the entertainment world have expressed their grievances for the great loss of Muhammad Ali.

My teacher. Thank you Ali.

Thank you for always showing me and my family love. He was so kind to everyone he met! I want my son @princejdc to always cherish this moment. #RIPALI we miss you. We love you. You have changed the world. And taught us all something REST IN PEACE GREAT ONE

R.I.P to the Greatest.

RIP to the greatest! Ali forever.

Our Prayers and thoughts are with @MuhammadAli and his family #AliBomaye

Hana Ali & the whole family, my heart goes out you. Muhammad Ali has been a fine man. That will never die. pic.twitter.com/3L5HK0zPCb

Float like a butterfly, sting like a bee Rest in Peace @MuhammadAli. We have truly lost one of the greatest ???? #RIPMuhammadAli