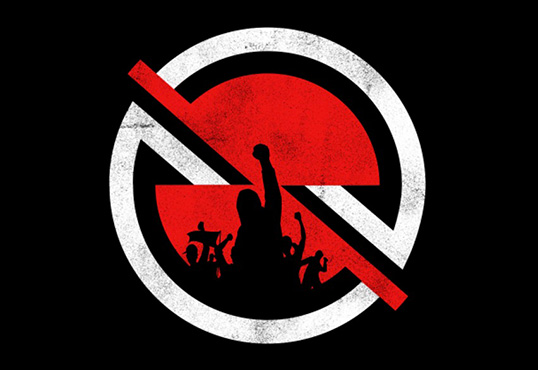 Los Angeles, CA – A cryptic website popped up this week that had Rage Against The Machine fans excited for a possible reunion. Now it’s looking like Public Enemy and Cypress Hill fans have reason to get excited too.

The site — ProphetsOfRage.com — doesn’t give too many clues about what’s going on. There’s a logo (pictured above), a timer counting down (with about 1 week, 4 days, 19 hours to go at press time), a hashtag #TakeThePowerBack (also the name of a song from Rage’s 1992 self-titled studio debut), and a place to submit an email address.

Posters with the same logo and the website address also started popping up around Rage’s hometown of Los Angeles over the last few days.

A source spilled the beans about what’s going on to Billboard, explaining that the band (minus singer Zack de la Rocha) is teaming up with Public Enemy frontman Chuck D and Cypress Hill’s B-Real to perform songs by the three groups, with their concert debut set for Hollywood Palladium on June 3.

On May 17, Chuck D tweeted out a couple of links to videos of a Rage performance from 2010. “Prophets Of Rage” is also the name of a track off Public Enemy’s 1988 album It Takes A Nation Of Millions To Hold Us Back.

Chuck D has collaborated with the group before, taking the stage for a performance of “Black Steel In The Hour Of Chaos” at the Pinkpop festival in the Netherlands in 1996, and he also teamed up with Rage’s Tom Morello for a performance with LL Cool J and Travis Barker at the 2013 Grammys.

Rage also recorded a version of Cypress Hill’s “How I Could Just Kill a Man” on their 2000 covers album Renegades.

Rage Against The Machine was a major force in music and political activism in the 90s. They reunited for a few years in the late 2000s, but haven’t released new music together since the turn of the millennium and haven’t performed together since 2011.