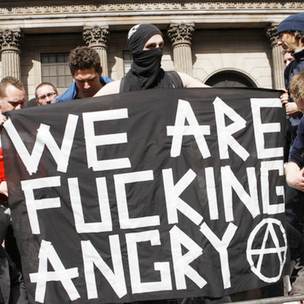 Get Your Mind Right: Rage Against The Machine

The modern-day corporate recording industry has done one hell of a job on African America. Actually, they have done any number of hells of a job—to effectively determine what is hot and what is not.

I bet you don’t know anybody who, through hard work and dedication, worked their way to the top in the recording industry.  Chances are, you don’t even know anybody who knows anybody who went from average Joe or Jane to superstardom (don’t feel bad, I don’t either). Which is interesting, considering the fact that you do know someone who can literally dance their ass off. We all know someone who can really, truly blow. So how come more off these folks don’t “make it big?”

In order to understand the paradox of massive community talent and miniature individual success we have to appreciate the nature, function, and purposes of the entertainment (e.g. recording) industry. The Entertainment Industrial Complex (EIC) is primarily engineered to distract (read: entertain) individuals from the fucked-upedness of their daily lives and society in general. Consider the front-page of the December 30, 2008 edition of USA Today, which contained the following headlines: A story about stock market declines, a story about Britney Spears, a college hoops update, a story about fuel shortages, a story about deaths in Gaza, a story about the decline of religious following in the United States, a story about NFL head coach firings, a story about the increasing numbers of airline flight cancellations, a story about the Obama administration offering the opportunity to win inauguration tickets, and a story about the top Hollywood box-office earners of the year. Centered on the page is a photograph of Lisa Frye, a concerned citizen from Middletown, Ohio, standing near a construction site. According to the cover story, Frye opposed an energy company’s plan to build a plant near an elementary school in Middletown. The report goes on to detail an eight-month USA Today study examining the impact of industrial pollution on schools across the nation.  The newspaper identified 435 schools whose air was worse than at an Ohio school that was shut down three years earlier.  That particular school had air-carcinogen levels 50 times higher than what the state authorities considered acceptable 2.

So to summarize, stories about kids who have been breathing poisoned air at school and mass death by war are situated
among stories of professional sports, celeb life, and Hollywood blockbusters. This newspaper’s front-page, (and countless others like it) celebrate stupidity by encouraging individuals to believe that the problems inherent in our collective way of life are fundamental to life itself. A newspaper full of information does not prompt individuals to ask how a story about hundreds being killed in the Middle East can be positioned right next to a story about who Brittney Spears is dating. In the end, when well-intentioned people read a story about schools with carcinogens in the air, there is no alarm and no cause for concern; much less surprise 3.

As a component of the EIC, the urban music recording industry functions in-part as a distractor from real life for millions of people a year. To a slightly greater degree than the print media, the recording industry simultaneously creates media content while effectively suppressing content that it does not sanction. In other words, determining what is not popular is just as important as determining what is popular. According to Melinda Newman of Billboard, “there are 30,000 albums released each year… [and] only 100 become hits 4.”  Said more accurately, only 100 are selected to become hits. In our world, they have the power to decide what is popular and what is not. By “they” I mean Sony, Universal Music Group (UMG), Warner Music Group (WMG), and EMI who by themselves “own and disseminate over 95 percent of all music CDs sold in the Western world.5”

Their decisions are implemented in a number of ways, including routine payola practices in terrestrial, Internet and satellite radio, intellectual property rights ownership, and the structuring of artists’ record contracts themselves (for a full discussion of each of these elements, I highly recommend to the reader Jared Ball’s I Mix What I Like: A Mixtape Manifesto.) Each of these phenomena is connected to systems of other processes in a sophisticated network enabled through secrecy, greed, corruption, and psychological control. In short, this is why it is so exceptionally difficult to “break-in” to the entertainment industry.

It is common knowledge that for every talented rapper with a record deal there are 25 artists with way more talent and way less buzz. Sure, there are countless rags-to-riches tales in Rap music lyrics. And that’s the point. There is the distraction. We are encouraged to view individual success as the result of hard-work, talent, perseverance, or some other personal characteristic. We never get messages about how the EIC hand-picks artists who are safe, and then (through what is now being called artist development) make them even safer.  In order to maintain its death-grip on the minds of African America, the EIC needs us to believe that we are the one’s choosing the media content broadcast over the airwaves and packaged between album covers. They need us to believe that what’s hot is what the people want.

Award shows and urban radio are key tools in the work of maintaining the illusion that real people are involved in the process of determining popularity. Award shows are the epitome of foolishness. First of all, regular people can’t get in. Only industry “insiders” are allowed anywhere near the building. Second of all, the whole envelope-opening ceremony is insulting, as (obviously) whoever put the name in the envelope are the same people producing the show. MTV, for example, has a “People’s Choice” award, which is paradoxical, since to have an award set-aside for what the people want is to acknowledge that the other 99% of awards are chosen by someone other than the people. Radio too, participates in creating the illusion of people’s choice. “Deejays” routinely give-out the station number and ask people to call in with their requests. Ever notice how they never air the callers who request something not already on their playlist? During any given week, Sony and UMG by themselves own 80-95% of the top 20 songs played across national radio6.  If the people had any say in what urban radio played, then the companies couldn’t play the same 11 songs every hour. If the folks listening to Dallas K104 had any choice in the matter they wouldn’t have radio that played the same exact songs as Hot97 in New York, or WGCI in Chicago. However, award shows and fairy-tale urban radio request formats are mere child’s play compared to the most seductively persuasive method of them all: the cable “countdown” program.

“Video Soul” premiered on BET during the summer of 1981 as a half-hour show. Legend has it that the program was created by BET executives as a result of MTV’s general refusal to air music videos featuring black artists. The show was a mega hit with viewers, and soon BET went to a 2-hour “primetime” format, which aired 9-11 p.m. EST. for close to 15 years. I remember “Video Soul.” I remember Donnie Simpson, and I damn-sure remember Sherry Carter. What is interesting is that the show’s run on BET almost perfectly parallels the twenty-year period between 1983 and 2003, during which the EIC went from fifty media corporations down to the control of a handful of men (all billionaire Rupert Murdoch types) you probably never heard of. Although “Video Soul” was always billed as the place for new black artists to showcase their work (GTFOHWTBS), the show didn’t evolve into the countdown format until Sherry Carter joined the show in 1992. I still remember the 1-900 number that you had to call to request the video you wanted. There was no Internet. At least not in the hood. I also seem to remember never having the video that I called-in about being played. “Video Soul” ended in 1996.

The heir apparent to “Video Soul,” “106 & Park” debuted four years later, on September 11, 2000. AJ Calloway and Free were likeable enough, their popularity eventually cemented by the daily “A-List” interviews with the likes of Jay-Z, 50-Cent, Ludacris, Nelly, Janet Jackson and Lil Bow Wow. Theirs was a dedicated countdown format, where the assumption was that callers somehow decided what videos made the countdown. Free and AJ were like well-intentioned parents who tell their kids that Santa Claus is coming to town. Their immediate successors, Big Tigger & Julissa were quickly supplanted by younger and more supple replicas Terrence J & Rocsi (who themselves were supposed to be “chosen by the people” as winners of some “New Face” contest). If AJ and Free were parents who tried to keep you young, Terrence J and Rocsi are your disgruntled cousins who didn’t get any presents and decided to burst your bubble. Does anyone really believe that somehow only songs by major label artists who have albums out are the ones being “voted” onto the countdown? And I won’t even get into the debasing caricature known as “Freestyle Friday.” Although “106 & Park” is the highest rated show in BET history, the program has lost all semblance of community authenticity. Even the name is an illusion. By naming the show after an address, its producer Stephen Hill intended to make it seem like a representation or extension of the Black and Brown community residents around E. 106th St and Park Avenue. Today, “106 & Park” isn’t even produced in Harlem anymore; now the studios are in Manhattan, a change that was made right after the network was sold to Viacom. They routinely show the hosts standing or sitting in the audience to give the impression that regular people are involved. But they are not. Regular people are, of course, at work.

Many other shows warrant mentioning here (e.g. MTV’s “Total Request Live,” “Yo! MTV Raps,” etc). What all of the above have in common is that their content is driven by the corporations, not the people. The truth is that “[w]hat we hear, see and read is only a fraction of what is produced and is owned by an ever-shrinking number of companies.7 Furthermore, despite their attempts to make these programs seem like cultural traditions (with anniversary and reunion shows, etc), they do not represent or reflect art produced for or by real people. The processes of musical selection and promotion have nothing to do with audience choice, and everything to do with corporate social control and agenda. DMX once said, “If you feed people dog shit long enough they will learn to put barbeque sauce on it.”  Get Your Mind Right: Don’t let the smooth taste fool you.