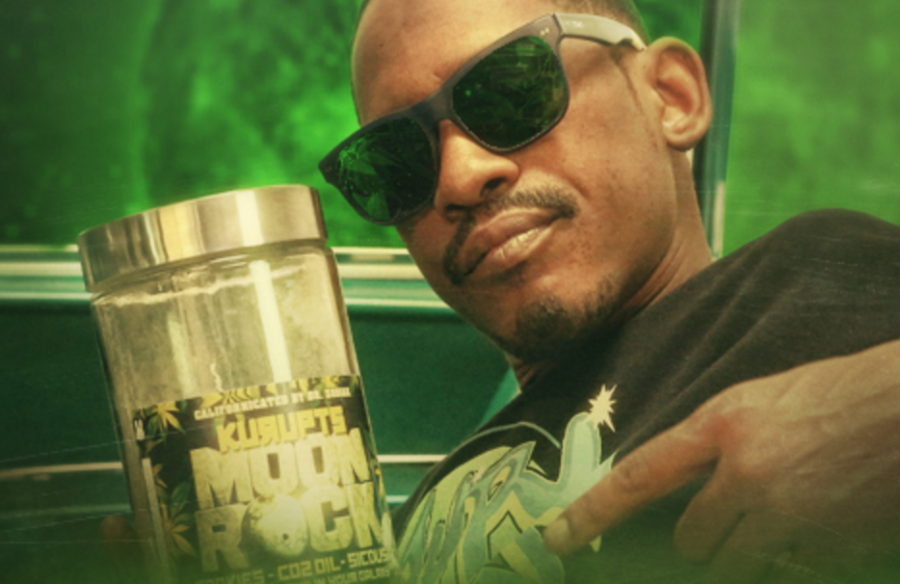 Los Angeles, CA – After meeting Kurupt at the Cage vs. Cons event he helped throw at the Los Angeles Memorial Coliseum and Sports Arena, Dr. Zodiak began working with Tha Dogg Pound rapper. But what started as a music relationship blossomed once the pair partnered in 2014 for Kurupt’s Moonrock.

Dr. Zodiak says during an exclusive interview with HipHopDX that it’s the potency that separates Kurupt’s Moonrock from other marijuana products. Self-proclaimed as “The Strongest Bud In Your Galaxy,” it is bud glazed in hash oil and then rolled in kief.

“When you hit a Moonrock, it’s going to be like drinking Jack Daniel’s or taking a shot of 151 Bacardi,” Dr. Zodiak says. “A shot of 151 is a lot more strong and intense and you’re going to feel it immediately. That’s a good way to compare Moonrocks to just normal weed. It’s twice as strong and it’s going to put you on your ass.”

In addition to its potency, Moonrock has benefitted from Kurupt’s reach.

“Kurupt, he’s out there promoting it with Snoop Dogg, making music and getting it into the hands of T.I., Juicy J, ScHoolboy Q,” Dr. Zodiak says. “You have all these different rappers that are making songs about Moonrocks, so it’s a good look.

“The best way to promote weed is through Hip Hop,” he continues. “The Hip Hop culture, it embraces weed. A lot of the music, the foundation is weed. Look at Dr. Dre’s The Chronic. That album sold well and the cover of the CD is a marijuana plant. I don’t know how to explain it. It’s just something that goes together like peanut and jelly. It meshes well. I don’t know why, but it goes well together.”

After the success of Kurupt’s Moonrock, Dr. Zodiak reached out to the person who introduced him to Kurupt for another weed venture. Wu-Tang Clan affiliate Killah Priest introduced the pair back in 2011. In January, Killah Priest, Ghostface Killah and Dr. Zodiak announced their Wu Goo line of products.

Wu Goo is for smokers who don’t want to light up in a bong or a pipe.

“It’s for the people that want that discreetness and that want something that’s also powerful, but they don’t want to smoke something out of a pipe or a bong,” Dr. Zodiak says. “They want to pull it out of their purse or their pocket and nobody knows what they’re smoking, or they’ll think they’re vaping.”

“It’s just hash oil with THC, but we’re just concentrating on the vape pens,” Killah Priest says during an exclusive interview with HipHopDX. “You’re going to be able to get it at all dispensaries and we’ll get it to the rest of the East Coast. It’s going really good. I can’t tell you much on it. I tell you one thing: when it hits, you won’t quit.”

The smoke’s strawberry, coconut and vanilla mango scents are aromatic, but the affect is anything but light, especially with the Yellow Dynamite pen that is set to drop in a few weeks.

“It’s like taking a hit from a bong,” Dr. Zodiak says. “This pen is going to hit 10 times more than our previous pen, so it’s going to get rid of the need for people to use a bong when they can have a device in the palm of their hand and get a super-big blast.

Growing up in Lynwood, California and later the East Side of Los Angeles, Dr. Zodiak has seen his business explode. He studied film and minored in marketing at California State University, Los Angeles. He got his BA and teamed up with Michael Lynch from Felony Fights and met Killah Priest.

Now, he works with Golden Boy Boxing, Oscar De La Hoya and Bernard Hopkins, and is planning a festival in August at the Pico Rivera Sports Arena that will feature camping, a carnival and music performances. He says it will also be the first weed festival in Los Angeles where people will be able to smoke.