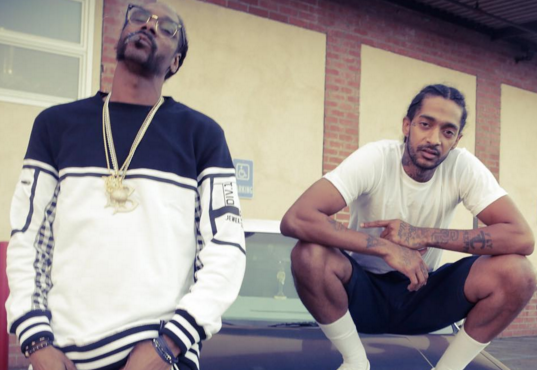 Snoop Dogg recently found some time to take out of his busy scheduling of being an entertainer of many hats to return to the booth to complete his upcoming fourteenth studio album.

As the MTV Movie Awards aired across the nation late last night (April 10), the Doggfather was holed up in the studio with a couple of artists you may be familiar with in Just Blaze and Nipsey Hussle and he documented a sliver of it on social media.

As the Instagram clip unfolds, the veteran producer—who has carved mega hits for the likes of Jay Z, Mariah Carey, Kendrick Lamar and Usher—is seen sitting on the mixer board as a ghoulish, West Coast-bass heavy track blares from the monitors.

“I’m back on my shit!” Blaze proclaims as he makes an attempt to rid himself of the gas face the beat has caused. Snoop was extremely appreciative of the track, telling the phone camera, “Motherfuckin’ Just Blaze is cooking right now. Ooh, and that’s all for me? Ooh wee!”

According to the caption in the video, the album will be released this summer, in July.

It was later revealed that Nipsey Hussle was also present and he later hopped on the tracks in efforts to make it future radio smash for the Internet radio stations, or even better.

“New album alert…” Justo wrote on Twitter. “Right place right time, next thing, I got @Nipsey Hussle and @SnooopDogg in the booth trading bars. Got me engineering and recording vocals like its 2001 again.”

The year in reference was a nod to the “Lollipop” he produced with Snoop and Jay Z over a decade ago that appeared on 2002’s Paid tha Cost to Be da Bo$$.

Snoop has also worked with Nipsey Hussle in the past; on the street single “Upside Down” from his 2009 LP, Malice n Wonderland. His last album, 2015’s Bush, was more a breezy funk and R&B hybrid but this upcoming endeavor appears to be steering back to the direction of aggression avenue.

Watch Snoop and Just Blaze “cook” in the studio below.

Right place right time, next thing, I got @NipseyHussle and @SnoopDogg in the booth trading bars. #rightprice #illmakeyoursh**tighter

Got me engineering and recording vocals like its 2001 again.