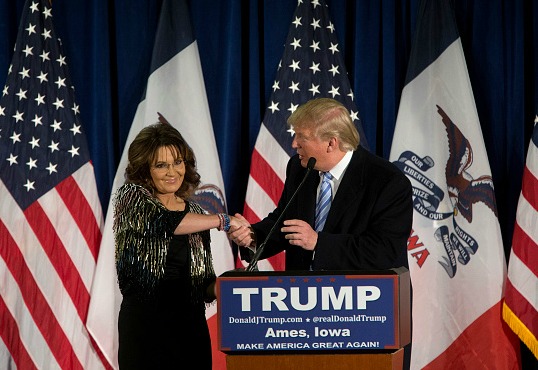 Former Governor of Alaska, Sarah Palin has responded to rapper/singer Azealia Banks, in an open letter uploaded to Facebook.

In her response, Palin criticized Banks, who she referred to as “female rapper” and “little darling,” for letting a fake news story lead her to the “bizarre, violent rants” made earlier this week. Later in the letter, the politician suggests that the two work together to fight racism and empower women.

“In this life, you’re blessed to have been given an influential platform,” Sarah Palin wrote in her Facebook post. “So have I. Why don’t we strengthen both our platforms and work together on something worthwhile – like condemning racism, along with empowering young women to defend themselves against a most misogynist, degrading, devastating assault perpetrated by evil men – rape.”

Banks issued a response of her own yesterday (April 5), as well. In her letter addressed to Palin, she attributed her past comments to her “really crass, New-York-City sense of humor,” and also offered an apology to Palin.

“Now since learning that the article was not published officially, I sincerely apologize for any emotional distress or reputational scarring i may have caused you,” Azealia Banks wrote in a Tumblr post. “In my honest defense, i was completely kidding. I happen to have a really crass, New-York-City sense of humor, and regularly make silly jokes in attempts make light of situations which make me uncomfortable. As the fabric of the American Nation is EMBEDDED with racism, I merely made a raCIALly driven joke to counter what i believed to be real, raCIST rhetoric. Also, i never said you should be raped. I used the term ‘run a train,’ which is slang for group sex, NOT for ‘rape.’ There are many distinctions between the two.”

As part of the latest turn of events, Palin is now threatening to sue Banks, according to a statement released to People.com.

“I’ve had enough of the unanswered threats and attacks against my family and me,” Palin said while speaking with People.com. “So, for the first time I’m going to enjoy the only retribution some protected ‘celebrities’ seem to understand – I’m suing Azealia Banks and can’t wait to share my winnings with others who have gone defenseless against lies and dangerous attacks far too long.”

Azealia Banks’ full letter can be viewed on Tumblr. Sarah Palin’s response can be found below.

Hey Female Rapper – listen up, little darling. No one has any idea what you’re wigging out about in these bizarre,…