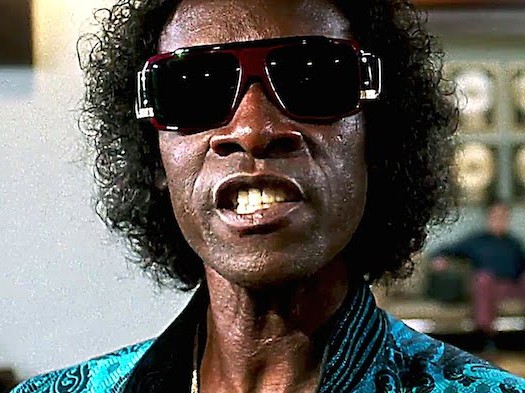 Los Angeles, CA – The Recording Academy hosted a screening of Miles Davis biopic, Miles Ahead last night (March 30) at the Landmark Theater in Los Angeles. Don Cheadle not only stars as the late jazz genius, but he also directed, co-wrote and produced the film.

Immediately following the screening, Cheadle participated in a Q&A where he reflected on the 10-year process endured to create Miles Ahead and his refusal to follow conventional story-telling.

“I felt like all the ideas were a little standard, a little straight ahead,” Cheadle explained. “I want to do this movie, it’ll be an amazing opportunity, but I want it to be innovative and crazy and kind of gangster and be like a heist pic. I want the heist to parallel the music and Miles’ lost voice and the muse and the passion of the muse. They looked at me like, ‘Wow. I don’t know what the fuck you’re talking about, but that sounds crazy…”

Miles Ahead captures possibly the darkest period in Davis’ life. Set in the late 1970s, the film sinks into Davis’ creative stagnation and cocaine addiction. His label, Columbia Records is pressuring him to release a comeback album when one of his crucial session tapes is stolen from his New York City home. Through a bullet-filled series of events, Davis and Rolling Stone reporter Dave Braden (Ewen McGregor) battle to retrieve it. Miles Ahead moves more like a caper set to the scat of a legendary jazz catalog than a visual Wikipedia page.

Cheadle also expounded on how he used Miles Davis’ “philosophy” as his directorial guide.

“We just always said to ourselves, ‘Do you think he would want a movie that was closer to things that have been done before? Or do you think he’d want something that was pushing it and trying to be on the edge of creativity,” he explained. “We just always said that we think that’s what he would want. We used his philosophy as our guide. Specifically looking at this period of time, Miles was always talking about playing what’s not there and playing the spaces between sound and understand what space is about. I wanted to be as close to Miles Davis as I could be and do something that was in the experience of Miles Davis, rather than chronicle this life and try to in someway instruct people on genius.

“So scenes like the Columbia recording sessions, that was something where we just did it,” Cheadle continued. “I said, ‘Give me the musicians. I want the same instrumentation. I want the chart, and we’re just going to work through the session like it would actually be done.’ So there’s no fakery going on. We’re really working through the section and catching incidentals that are wrong in the chart and changing it. That was fun to just have that and do that. That was the goal: To be close to Miles… and try to walk in his giant shoes and somehow put my feet in there and try to do that.”

It seems as if the spirit Cheadle described leaked into the soundtrack. Lauded jazz composer, Robert Glasper manned the music for Miles Ahead, which includes “Gone” by Pharoahe Monch. The Queens-emcee detailed the recording session during a recent conversation with DX’s Trent Clark.

“We worked on some original stuff and the shit came out so Illmatic,” he said. “We were in the mad old school style studio with all the instruments with the wood panels and piano, horns and all that stuff. We wound up working on this one joint. It was me, Robert and Keyon Harrold—who actually played trumpet on the song and throughout the film—and we came up with an ill joint and [Sony Pictures Classics] loved it. We just kept it raw. We actually just kept it like we did in the studio; just mad raw but when you hear it in the soundtrack, it will actually be mixed.”