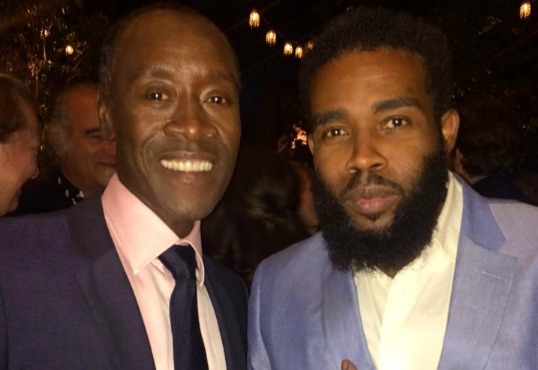 Los Angeles, CA – As music fans and moviegoers alike head to the theaters to soak in Miles Ahead–the enthralling new Miles Davis biopic that was ten years in the making—it is practically a given that viewers’ ears will be just as actively engaged as their eyes. After all, the highly celebrated late musician led the charge on several subgenres during his reign on the circuit, which serves as equitable fodder as his drama-filled life of drug abuse, woman swapping and pistol brandishing that is also highlighted throughout the film.

As the end credits begin to roll, keen ears will suspect the infinite wisdoms of Pharoahe Monch putting an audio cement on things. The veteran MC was personally asked to work on the film’s score by Miles Ahead lead—and director—Don Cheadle, and the outcome was just as artistic as the filmmaking process as it self.

During a highly informative phone call, HipHopDX gained some insight on the record and just want Monch has in store for the rest of year. In a couple of weeks, his last studio output in PTSD: Post Traumatic Stress Disorder will turn two-years-old, which speaks volumes for the anticipation he has built amongst his fans to release new product.

“Robert Glasper was involved heavily on the soundtrack. And Don Cheadle is a huge supporter of my music and is a fan and he reached out,” energetic Monch relayed. “We worked on some original stuff and the shit came out so Illmatic. We were in the mad old school style studio with all the instruments with the wood panels and piano, horns and all that stuff. We wound up working on this one joint. It was me, Robert and Keyon Harrold—who actually played trumpet on the song and throughout the film—and we came up with an ill joint and [Sony Pictures Classics] loved it. We just kept it raw. We actually just kept it like we did in the studio; just mad raw but when you hear it in the soundtrack, it will actually be mixed.”

The song Monch is referring to is titled “Gone,” the cinematic closer for a biopic The Hollywood Reporter said will draw in jazz enthusiasts for its “adventurous, music-saturated depiction.” Monch’s initially reaction from screening the film was being “blown away” because “what can you say about Mr. Cheadle’s acting?”

It was the Davis estate who approached, and eventually coaxed Cheadle into embodying the role of Miles, a role within Hollywood he attributes to being “bigger” than his himself.

“I didn’t do it for some award in February,” Cheadle told the NYDailyNews in a recent interview. “But all of those things if they were to happen, it might make it possible for other people (of color) to get to (make their films) as well.”

Having Cheadle’s vision while creating “Gone” is something else that will go unheralded but ultimately became an ex-factor.

“It’s an honor for me to work with Don; he was in the studio every time I was in there, giving his input,” Monch says. “It’s a real deep record. It’s not what you think. People probably think we went for something straight-ahead. It’s pretty out there, lyrically. It’s from a perspective of how we’re all connected universally, intrinsically and our energies are all connected. Even when we move on and we go away, those impressions are still lasting in us and inspiring us so it’s kind of like Miles speaking from the universe.”

The final fade on Miles Ahead declines to list the late jazz great’s death date of 1991, opting for the open-ended “May 26, 1926 -” a direct nod that his music will last until the end of days. Possessing a discography of nearly 50 albums (which excludes live albums, compilations, etc.) some of the greatest works of recorded music have come out of Davis’ horn. For instance, his 1959 album, Kind of Blue could be considered the “Illmatic of jazz albums,” as it holds the distinction of being a jazz album for people who don’t really listen to jazz.

Harboring on his upcoming in the extremely competitive 90s rap arena, Monch put into context how great it was to work on the soundtrack.

“Miles and [John] Coltrane heavily influenced a lot of my earlier work with the fact of wanting to challenge myself with the breathing techniques when doing long-winded runs and stuff like,” he recalls. “Just listening to a lot of those cats my father and older brother, I was always like, ‘Damnnn, how does he hold his breath that long to play that way?’ And that’s what encouraged me to do those runs and incorporated notes into different patterns. So it wouldn’t just be a monotone run. It would also be melodic, as well. That comes from jazz, y’know? It all coincides when I’m looking at the film and Miles goes into that fusion period and I’m like, ‘This is what’s it’s about.’ It’s all Black. It’s all African. It’s all communication. For me to be that young and for me to [understand it] like that, it’s just a travesty that the kids today, in terms of the marketing, are being told that they’re not in the demographic to get deeper Hip Hop because it’s not in the same temperament of what’s popular. And I know that’s not true because I’m a product of being a young man and vibing out to Stevie Wonder and Marvin Gaye and Miles—in their deepest period. Those are things that inspired me to write the way I do.”

Hitting a stride on a soundtrack for one of the more award buzzworthy films of the year is a definitely a good look but what about the next Pharoahe project? The revered MC has acknowledged he’s very methodical (and tardy) when it comes to piecing together an album but he describes his next body of work to DX as “Oh, my God!”

“I was just sitting here listening to the joints on the new project and whereas before, I can say this honestly using the word ‘rock’ to describe the record because everybody has their idea of what that means and we don’t want to throw people off. Because lyrically in the past, I have pushed myself and I never played it safe because as an artist, it’s wack to be safe. You want to challenge yourself. That’s the only way you’re going to get better and make exciting music, in my opinion.”

Those who may be expecting a politically correct Monch record (which he says is in currently in the mix and mastering process) may want to brace themselves. It may turn out to be one of those “was-wack-until-it-grew-on-me” scenarios.

“But this new record, it does not care about who it offends. It’s not guarded in any way. It’s my most hardest record and lyrically it just like, I don’t mind offending,” he continued with a hearty laugh. “In any way you can imagine on an ethical, political, lyrical and spiritual level, it’s just the darkness that’s inside the head that is 13. It’s not even Pharoahe on this record. It’s shaping up to be my favorite so far. It’s something I’ve been wanting to do for like at least 10 years now. When we left the last major situation [with Universal Motown], I was creeping up on some of these ideas after Desire, and then once we decided to be independent, we knew it would be better to do more of a grassroots eye-level record so the fans could see us with W.A.R. (We Are Renegades). And the W.A.R. album sold more than the Desire album because of that. The PTSD (Post Traumatic Stress Disorder) was a follow-up to that emotionally because I feel in my career I never express from the inside of who I am from my perspective without being metaphoric. [A display] of who Troy Jamerson is,” he explained.

“This next record is the unadulterated look inside the headspace the same. I think even the most hardcore Pharoahe fans are going to be like, ‘Holy shit!!!'”

The Miles Ahead – Original Motion Picture Soundtrack, will be available on April 1, courtesy of Columbia Records.