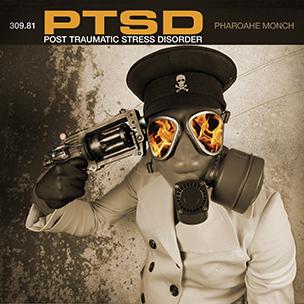 It’s about two years late, but considering that the wait between his first two albums was eight years, Pharoahe Monch’s P.T.S.D. (Post Traumatic Stress Disorder) is right on time. Years ago, the enduring perception of Monch’s career was that it was marred by false starts and delays. Another blistering addition to Monch’s discography, P.T.S.D. helps make the case that Pharoahe now possesses one of Hip Hop’s strongest catalogues.

Monch’s thematic progression continues on P.T.S.D., which tacks on the issue of mental health. Like his past (and continued) exploration of themes like war, basic rights and freedoms, and gun violence, Pharoahe expertly intertwines these concepts, weaving in and out of them, combining them, and often using one or more to highlight another. Monch smartly draws connections between these issues and how they impact people of varying socioeconomic statuses. On “Losing My Mind,” he delves into his personal mental health issues: “My family customs were not accustomed to dealing with mental health / It was more or less an issue for white families with wealth / Void, I defected, employed, self-annoyed / Went independent, enjoyed stealth / Now doctors prescribed sedatives and Prozac / The rent’s cheaper in the ghetto, but you can’t go back / So I spin the cylinder on my revolver / Then, maybe let it draw blood like chupacabra.” Monch, who has confirmed that his own bout with depression informed the material on the album, digs in on tracks like this one, “Times2,” and others.

Though it’s been out for nearly two years, it would be remiss to not mention “Damage,” the Lee Stone-produced conclusion to the trilogy that began 20 years ago with Organized Konfusion’s “Stray Bullet” and Monch’s own “When the Gun Draws.” While it’s gleefully exciting to hear him name-check the tracks, the real value is in the sober reminder that gun violence claimed the lives of Oscar Grant, Aiyana Jones, Sean Bell, and Trayvon Martin: “Then I will ring your bell like Avon / Before displaying some of my various tattoos, Trayvon / The Oscar award-winning Aiyana Jones, hey Sean.”

It’s not all somber on P.T.S.D. “Bad MF,” for example, is just prime shit talk. It fits into the album, but it’s clear Pharoahe’s letting loose on the track, beating his chest and asserting dominance. It’s “D.R.E.A.M.,” however, that really lightens things up at the end, as Monch and guest Talib Kweli record what feels like the audio equivalent of finally breaking out of depression and seeing a brighter future.

The gospel according to Pharoahe Monch (and yes, it’s as much Gospel music as it is Rap) continues to play out through his albums in new and creative ways. For those wondering, yes, there is a reason that Eminem shouted Monch out on the hyper-techincal “Rap God,” and the Queens spitter showcases his gargantuan stylistic aptitudes on tracks like the whirlwind “Rapid Eye Movement” with Black Thought. But Monch “purists” who expect to hear an album full of the sinister rhymes in the vein of Internal Affairs are now officially living in the past. Much like with W.A.R. and Desire, P.T.S.D. seeks to accomplish more than just keep Pharoahe’s spot on the criminally-underrated lists warm; instead, it makes a case for placing him among the Chuck Ds and Ice Cubes as one of Hip Hop’s sharpest social voices.