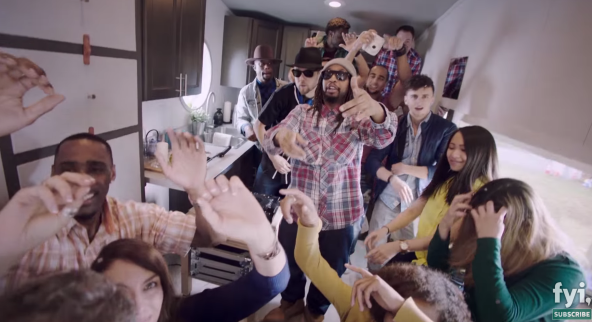 To kick off the new season of Tiny House Nation, the producers over at the fyi, network have invited the King of Crunk to christen one of their ridiculously small living spaces with one of his epic parties.

Lil Jon joined hosts John Weisbarth, Zack Giffin and dozens of partygoeers on this season of Tiny House Nation to do what he does best and that’s fill up a room with music and wildness. In the two minute clip taken from one of the upcoming episodes of the series’ fourth season, the universally known DJ is spotting spinning records, grilling burgers and playing darts as if the mini home could accommodate such a frenzy.

The song, performed by Bruce Waynne of Midi Mafia, utilizes the “Saturday night” chant to play off the show’s run date of Saturday, March 26 at 9/8c.