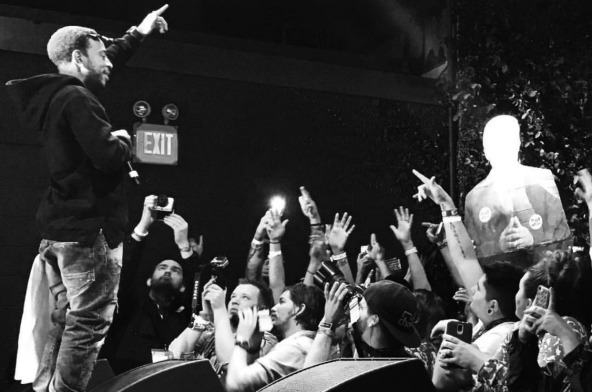 Austin, Texas – SXSW’s film and interactive side is slowly getting a dose of the music side with every passing year. On Saturday, March 12, Austin’s city limits were set ablaze with classic Atlanta Hip Hop as Ludacris and Lil Jon both checked in to The Belmont located at 305 W 6th St. in the downtown area.

The event was a collaboration of online radio beast TuneIn, Comcast Ventures and social media site WhoSay to commemorate the 2016 SXSW Interactive Festival.

Forever the King of Crunk, Lil Jon warmed up the 1000-person patio and bar space with live wire rap hits amidst a bevy of EDM bounce. After nearly an hour of spinning records, he gave the already energetic crowd a champagne shower as he closed his set with his Billboard chart-topping single with DJ Snake, “Turn Down for What.” After a brief changeover, DJ Infamous, Lil Fate Wilson and Ludacris took center stage and immediately got down to business.

Despite releasing an album last year with Ludaversal, it’s hard to overshadow one’s association to a billion-dollar franchise such as all Fast & Furious everything. Fans who pegged him for a movie star with a microphone immediately flushed the notion once he ran through his verse on Snapchat swag lord DJ Khaled’s “All I Do is Win.”

Thankfully fans in the front row had been riding with Luda since day one and they matched his every line as he blitzed through unforgettable hits like “Area Codes,” “Southern Hospitality” and “Act a Fool.” When Lil Jon returned to stage to assist with Usher’s mega smash “Yeah,” crunk had resurrected, if only for a two minutes, to remind trap music whose legacy hit the hardest. During the Luda/Jon tag-team melee, a political highlight was achieved when Luda requested the life-sized cardboard Donald Trump figure and ripped his head off, Mortal Kombat fatality style.

The event was livestreamed online and across the venue by TuneIn. Check out photos and video of the show below.