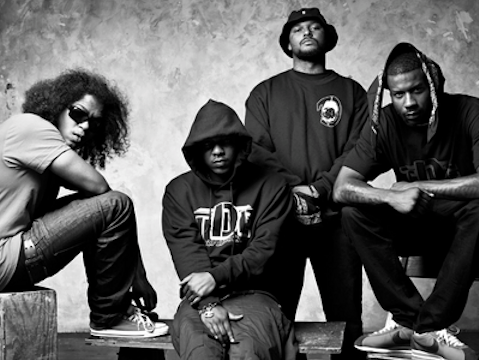 The status of ScHoolboy Q‘s and Black Hippy’s LPs are among those discussed during a new interview regarding TDE’s slate of releases.

“What’s standing out to me right now, is [Q’s] attention to detail,” TDE president Punch adds. “The details in his bars is way up. To me, he’s way more lyrical on this album than he’s ever been. There’s a certain imagery that he’s bringing out in this one. I’m an album guy so I like all of those intricacies throughout the whole project.”

Ab-Soul, SZA and Isaiah Rashad are also working on their next projects.

Jay Rock is healing after a February motorcycle accident.

“He’s recovering,” Punch says. “It’s going to be a process. He was hurt pretty bad. He was in the midst of recording his next stuff. The best part was that there wasn’t no type of head injury so he got all his senses.”

Jay Rock is a member of Black Hippy, the group that also includes ScHoolboy Q, Ab-Soul and Kendrick Lamar. The quartet’s long-discussed album is still in the label’s plans.

“Everybody has their individual careers, so it’s tough to find the time for everybody to get back together,” Punch says. “We’re really just going to have to block out a couple of months, or however long, and just lock everybody in the studio like the old days.”