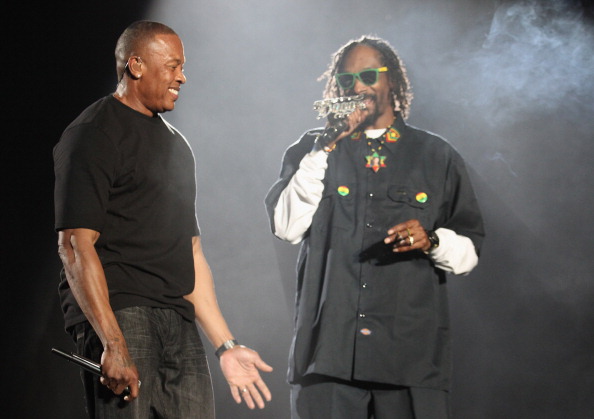 Snoop Dogg called into DJ Whoo Kid‘s “The Whoolywood Shuffle” radio segment and detailed plans on the possibility of a Summer tour featuring himself, Kendrick Lamar–fresh of his recent GRAMMY Award-winning sweepstakes–Dr. Dre and Eminem.

Dr. Dre previously revealed the possibility of a European tour last year featuring N.W.A and Eminem to promote the film Straight Outta Compton. Snoop took the bait when the G-Unit disc jockey dangled some big tour news he had obviously heard through the grapevine.

“We trying to get it together,” Snoop says. “Like Dre said, he wanted it to be myself, him, Kendrick, Eminem. It’s a wish list that could possibly become a reality if all parties agree, to disagree. I’d love to make it happen. I love everybody involved. I’m not trying to get all the money. I just want what I’m worth and I’m gonna do what I do.”

In 2000, Dre, Snoop, Eminem, Ice Cube, the late Nate Dogg and others, blazed across the country for the highly successful “Up in Smoke Tour.” According to ABC News, the tour managed to gross more than $24 million. Sixteen years later, that gross will likely be multiplied in the nine-figure range should the new proposed tour get off the ground.

Elsewhere in the interview, the Youth Football League coach also shares some of the sportsmanship advice he gives to his football players and explains why he sympathizes with Carolina Panthers’ quarterback Cam Newton‘s actions after losing the Super Bowl against the Denver Broncos.

“How many people out here you know like to lose?,” the “California Roll” rapper says. “Leave that man alone. People don’t like to sympathize to the reality of what it is. If you in the spotlight and you winning and winning and then you lose and you’re a sore loser this is what’s going to happen. He told y’all he was a sore loser.

“I be at celebrity games ready to beat up some of the celebrities or some of the people because they don’t know how to play or play as hard as me,” Snoop continues. “That don’t make me a bad person. That just mean Snoop Dogg is competitive and he likes to win.”

Snoop Dogg’s full interview with DJ Whoo Kid on Whoollywood Shuffle is as follows. His tour revelation can be heard at the 3:07 mark in the video below.: