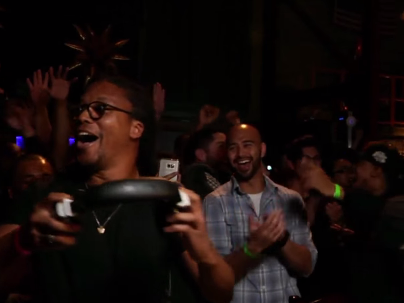 The Tetsuo & Youth creator recently took down the world’s reigning Street Fighter champ, Daigo Umehara during the Street Fighter V launch gala in San Francisco on Monday, February 15. The Japanese-born Umehara is a Guinness World Record holder for obtaining the most wins in Street Fighter tournaments and even has an exclusive sponsorship deal with interactive company, Mad Catz.

For exhibition purposes, the two fierce competitors squared off in a best-of-five matchup using the iconic 2-D fighter’s most iconic characters, Ken (Fiasco) and Ryu (Umehara). As the intensive dual set the stage for a final Game 5 matchup, that’s when Lupe shot his shot and won with a flying jump kick, much to his own surprise.

Following Lupe’s unexpected victory, there were notions that his win was staged to create a wild headline to center around the game’s rollout. A notion that was immediately shot down by Umehara himself.

“Given that Lupe is such a wildly talented artist, it shouldn’t be surprising that he came to play against me last night,” the Japanese legend told Kotaku in a statement. “I would like to congratulate him on his victory last night, but let’s say that you can eagerly await a rematch. The crowd warmly welcomed us and was so excited. I thought it was a great run. Lupe gifted me his own “Metal Gear” jacket (which I wore at the autograph session latter). I believe it was because he thought we had good matches too!”

As Polygon points out, it is a fairly common practice for [tennis] exhibition matches to see the obvious favorite commit to intentional tanking before pulling off a miraculous victory at the tail end. If that is the case here, Umehara just may have underestimated The Cool a bit too much.

Street Fighter V launched on Tuesday for PlayStation 4, Microsoft Windows and Linux to a host of issues, albeit understandable, due to its immense popularity but Capcom has since sorted them out. Although no sales numbers has been released as of yet, the company has put it in writing that they expect two see two million copies sold before the end of the fiscal year.

Watch Lupe Fiasco best Daigo Umehara in Street Fighter V down below. The final round starts at the 17:05 mark.