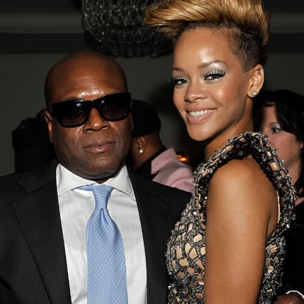 New York – During an interview with The Breakfast Club today (February 4), Epic Records executive L.A. Reid delved into his recent signing of Rick Ross and why it’s not concerning that the Boss’ album sales have slid consistently in recent years.

“I think great people are always one hit away from having massive success,” he said in response to DJ Envy’s question. Reid was part of the team to initially signed Ross to Def Jam records in 2006. While his debut album, Port Of Miami is considered a Hip Hop classic by many, his most recent Def Jam release, Black Market sold only 34,000 copies in its first week. “[Rick Ross’] stay [at Def Jam] had run its course,” Reid said. He then emphasizes the importance of supporting the culture and ensuring legacy artists that have had a significant impact always have a label home.

“I’m supportive of the culture,” Reid said. “I like to think of myself as not a fair weather friend, but as a real friend and a person that’s really committed to your career. It doesn’t matter to me. Even if it isn’t massive success, do these artists deserve a home? I look at it this way: The Rolling Stones don’t have to look for a recording contract. Bruce Springsteen doesn’t have to look for a contract and he’s been in the business for how many years, right. So I don’t want any black talent to wonder ‘Why don’t I have a home?’ Barbra Streisand still has a home. Does she still sell like that? Not sure that she does or doesn’t. That’s not my business. The point is, she has a home. She’s taken care of. It’s my job to take care of artists.

“I had Ronald Isley signed from the Isley Brothers,” he continues. “He made his first record in 1959. I had him signed even while he was incarcerated. I kept him signed and took care of his family. I’m not saying that because I want an award or a trophy. The point is, he’s Ronald Isley. He’s the Isley Brothers. Jimi Hendrix was his guitar player. Elton John was his piano player. He’s royalty. I want to take care of that.”

Reid was also asked his thoughts on the TLC biopic, CrazySexyCool which premiered on VH1 in 2013. The movie was critical of TLC’s former manager Pebbles who was previously married to L.A. Reid.

“I didn’t watch it,” he said. “I have children. My ex-wife was portrayed in the movie. I didn’t watch it, but I knew my children were not happy about it. If I have to make a choice, I’m gonna side with my family.”

Rick Ross signed to Epic Records on January 15, 2016. For more information on Rozay, view the DX Daily below: