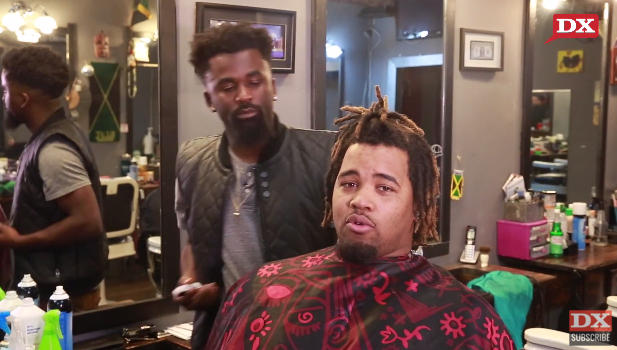 The city of Dallas has long bred personality into American life but its mark on the Hip Hop scene has always been noticeably scarce.

Allow G.U.N. to swoop in a change that notion as he’s been methodically carving out his own lane within the ever-changing canals of the rap game.

Coming off a year that birthed two winning singles in “Undi Lay” and “Johnny Cage” has made it fitting for the New Dallas sheriff to be the first profile on HipHopDX’s new show, Faded with Jimmy Hu$tle, devised from the brainchild of Director of Video Production, Peter Sobat.

As the name implies, our new series serves as double entendre as our subjects get placed in the barber hot seat for some updates on their career movements and then proceed to square off against Jimmy in beer pong for a chance at something great.

In the inaugural episode, G.U.N. a.k.a. Geeked Up Nigga updates us on what we expect from him musically in 2016 and shares (his first) experience in New York City when his cell phone was dead and saw more than he bargained for. As for the beer pong game, the stakes are high as he’s offered the chance to get his music video–should he emerge the victor.

Does he get the prize? Only one way to find out. Check out the debut rollout of Faded with Jimmy Hu$tle and keep it locked at HipHopDX for more material.