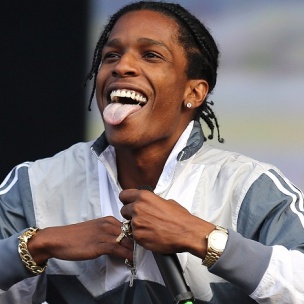 During an appearance on Ebro In The Morning on Hot 97, A$AP Rocky spoke on A$AP Yams Day, his Forbes magazine cover, and more.

With A$AP Yams Day quickly approaching, the tribute concert is scheduled to take place in New York City on January 18, Harlem rapper A$AP Rocky was asked what fans can expect at the concert, during a recent radio interview.

According to the A$AP Mob lyricist, those attending can expect a lot of love.

A$AP Rocky also recalled working with A$AP Yams to take A$AP Mob, which was less of a rap collective when it first began, to the next level.

“Before people knew about me, I would have to say it was only me and A$AP Yams who kinda developed A$AP Rocky at those stages because I didn’t—He had a Tumblr. He interned at Warner Bros,” he said. “He knew producers and he’d get beats and all that other stuff…We structured it together. A$AP was just all about getting fly. Going around Harlem to the cookouts and all that other stuff. I’m like ‘Nah, we gotta do something with this, man.’”

In regards to making the cover of Forbes magazine’s “30 Under 30” issue, the rapper revealed that he was most proud of the way he was portrayed on the cover.

“Don’t get me wrong,” Rocky said. “We talk about cars and stuff like that every now and then. And we like that kind of stuff. And money and jewelry. Why not? But we don’t personify it. It doesn’t symbolize who we are as individuals. And guys like us, we don’t get glorified for that side of us every day. So, for me to be on the cover without chains and bracelets. A Dior suit on that I actually picked. I think that’s kinda tight, man.”

Video of A$AP Rocky speaking on A$AP Yams Day and his Forbes cover, can be found below.