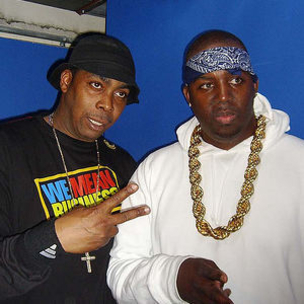 EPMD stands for “Erick and Parrish Making Dollars.” The Rap group, made up of Erick Sermon and Parrish “PMD” Smith, released seven studio albums detailing their business plan in the music industry from 1988’s Strictly Business to 2008’s We Mean Business.

In light of Erick Sermon’s recent release, ESP, XXL made a list of “10 Business Tips From EPMD’s Lyrics.”

For conflict resolution, the magazine suggests following the advice of EPMD‘s song “K.I.M. (Keep It Moving).” This was from the 1997 album Back In Business, which was released after the group went on a five-year hiatus. The group took a break because tensions were high and Smith’s home was broken into by people reportedly hired by Sermon.

“In a standard 40-hour work week, even the most pure-hearted people are liable to lose their cool when forced to encounter brainless coworkers day after day,” the site says, “possibly even going so far as to contemplate paying armed intruders to raid your colleague’s home (unfortunately EPMD know all about that scenario). It goes without saying that going on a rampage against your co-workers is never a good look for yourself or the business, no matter how high they rank on the jackass Richter Scale.”

In regards to personal branding, XXL cites “Pioneers” as the song to use for inspiration. It notes EPMD’s use of the word “Business” in all of its album titles as an example.

“Think of yourself as a business rather than a businessman or businesswoman,” it says.

The magazine also says for successful business, EPMD taught its listeners to remember their roots. Using “Please Listen to My Demo” and “Crossover” as reference, the site says to “never forget where you come from.”

“It’s important to always keep your humble beginnings in your rearview,” it says. “No matter how much success you achieve, always keep a simultaneously humble and confident mindstate. This will prevent you from becoming a sell out.”