Now a regular figure at the annual Consumer Electronics Show in Las Vegas, 50 Cent sat down with What’s Trending at this year’s conference and answered questions about the current state of technology and his own SMS Audio line specifically.

Speaking about the growing SMS brand, 50 Cent broke down the company’s latest expansion around the world.

“We’ve been able to launch in over 62 countries,” he said. “We actually beat out some of the top brands in those international territories, too. We were able to create the BioSport version of SMS Audio headsets. This headphone has technology in it that allows it to monitor your heart-rate, how far you ran, how many calories you burn. We were able to launch it first. I think Apple’s acquisition of Beats was for music, the rights they had to music and different things made it cool.”

Addressing SMS’ partnership with Star Wars specifically, 50 explained the magnitude of the deal.

“The Star Wars brand has sustained its relevance since 1975,” he said. “It’s really one of those companies, they won’t license Star Wars to someone—it’s tough to climb in bed with Star Wars.

“They would only associate themselves with a high-end audio product and then you identify with the real passion connected to the Star Wars brand and gotta ramp everything up,” he added. “This is our second generation of it. This will be out May. The film doesn’t come out until December.”

After joking about his botched opening pitch at an MLB game in 2014, 50 was asked about his predictions for music industry trends moving into 2015.

“You gon’ start to see artists immediately,” he said. “The song’s gonna come out before the record companies have a chance to listen to it ’cause they’ll make the record. And artists feel like they have a hit or they’re passionate about the music and they got platforms that they could put it out on and no limit to how far it can go with exposure.”

Yeezy is looking for tips on being independent from three men who dominated the 90s.

Larry Chatman is accusing Young of writing herself another check from the Record One Studio bank account. 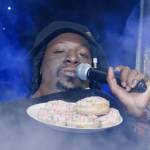 The Adult Swim series is scheduled to return after a four-year break.