Nothing a celebrity puts on Twitter goes by unnoticed, especially if it’s controversial. B.o.B. found that out the hard way as he attempted to backpedal and erase his latest Twitter rant.

The Atlanta native recently took to the social media site to relay his displeasure over what he believes are people only Tweeting about Ferguson and the killing of Michael Brown.

“All niggaz gon do is TWEET!!” he originally tweeted. “Y’all ain’t gonna REVOLT!!! I bet y’all won’t overthrow the government of nothing!! All you gonna do is TWEET!”

B.o.B. also attempted to point out what he believed was hypocrisy between certain circumstances of crime and punishment and the Michael Brown case.

“So Antwon will shoot 12 people in a week and y’all be like “FREE TWON!” a cop shoot a nigga and y’all riot… ok… #facts,” he said. Now all tweets on the matter are gone. HotNewHipHop recently presented screenshots of the tweets that were deleted shortly after they were posted.

Michael Brown was killed on August 9 and the controversy surrounding his death caused not only the community of Ferguson, Missouri to protest but people nationwide and sometimes worldwide have also decided to join in. He was gunned down by a police officer who many claim wrongfully shot the unarmed teen. J. Cole and Elle Varner have each released songs in support of justice on the case. 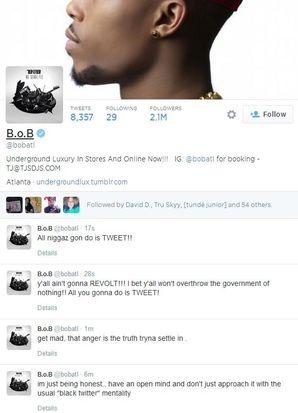