Da Mafia 6ix has announced its The Triple 6ix Massacre Tour, which is slated to kick off July 11 at Club XS in Corpus Christi, Texas and conclude August 29 at LVCS in Las Vegas.

“Who will survive?” DJ Paul says in an exclusive statement to HipHopDX. “It’s gona be crazy. We are hitting parts of the South that we missed on the [Triple 6ix] Sinners Tour like Texas, which is where a lot of our fans from day one live. We’re also hitting up the Gathering of the Juggalos again, which is a perfect event to fall in our Massacre Tour because it’s so crazy on its own.”

The Triple 6ix Sinners Tour launched in February and the Gathering of the Juggalos is slated for July 23-27 at Legend Valley, a 120-acre, privately owned and fenced-in outdoor music venue in Thornville, Ohio. Tech N9ne, Da Mafia 6ix, Cypress Hill, Dizzy Wright, Hopsin, Yelawolf, Ces Cru and Madchild are among the acts slated to perform at the event.

DJ Paul says that he and Da Mafia 6ix have other tour plans.

“We’re going to finish the rest of the year out with three more tours planned after The Massacre: a Winter European tour, a DJ Paul college DJ tour… and the other is gonna be so nuts that I’m going to wait to surprise y’all with it,” DJ Paul says, “but basically it’s gonna involve DM6, rappers and rockers.”

The Massacre Tour itinerary is as follows. More dates are TDB.

The Massacre Tour flyer is as follows: 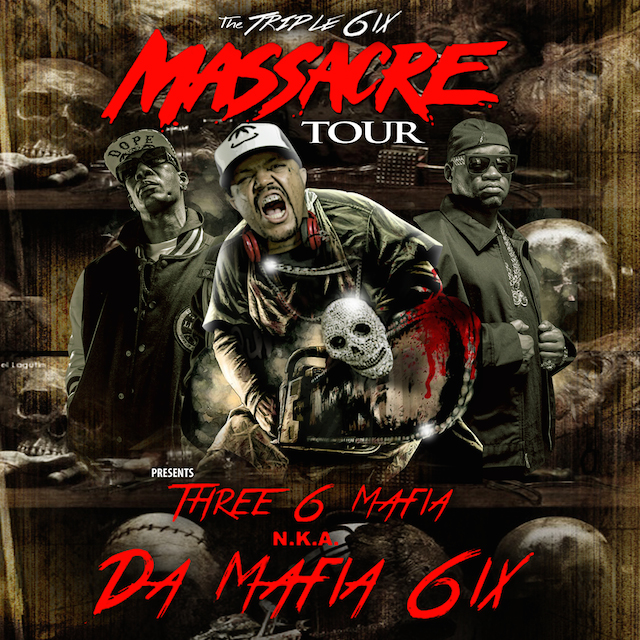