Rhymesayers Entertainment and Dilated Peoples have announced the release date for Directors Of Photography, the group’s debut album on the imprint, set to be released August 12, 2014.

Dilated Peoples spoke with HipHopDX about the album in October 2013.

“In this process, not that much has changed,” DJ Babu said at the time to HipHopDX. “You’d be surprised how easily you fall back into your roles and understand where you fit in with each other. Being in the studio is definitely something that we love and something that we would probably do whether we had a Dilated album to work on or not. We’re like studio rats. Ev was definitely producing the shit out of this record. All of us, but Ev was really striving for a sound. We still are striving for a particular cohesive sound that we’re trying to get. Things have changed since we’ve been around, but we’re trying to walk a fine line between keeping it classic and pushing it forward…We’ve spent a lot of time sharpening our swords and I feel like Ev’s been leading us in that direction, to really try new things while still being us.”

Rakaa Iriscience added to this:

“We’ve never stopped working together,” Rakaa Iriscience said at the time. “We worked on each other’s projects. We still tour around the world year-round, doing festivals and mini-tours all year. Even though we don’t do a lot of stuff out here in the States and there hasn’t been an album campaign, we still tour. So, the live chemistry and the working chemistry is there. But as far as the creative direction of what we’re trying to say and how we’re trying to say it, it’s been many years of working on solo projects, so like anything else, you kind of have to figure out where the lines are and maintain your inspiration through the that. That’s been a balancing act in itself, but I think some really dope material has come out of our ability to do that.”

Evidence also spoke about the effort at the time, explaining the group’s dynamics.

“I don’t think it’s friendship,” Evidence said at the time. “I think it’s family at this point. Friends do friend shit, but we do more family shit. So, it’s like, so many years and so much history, it’s basically like part of your DNA. It’s a code that becomes written into you. What we do on stage as the three of us, or what we do in the studio, it’s been a longtime coming. So, yeah, there’s definitely a lot of things that didn’t happen overnight that jelled over time, but there was also a lot of youth in our beginning shit. So, a lot of the mistakes were great because of innocence that was behind it. There’s a difference between being young and inexperienced and being skilled and wise. We’re trying to take those energies and put it in the middle.”

Dilated’s Directors Of Photography cover art, shot by Brian “B+” Cross is below. 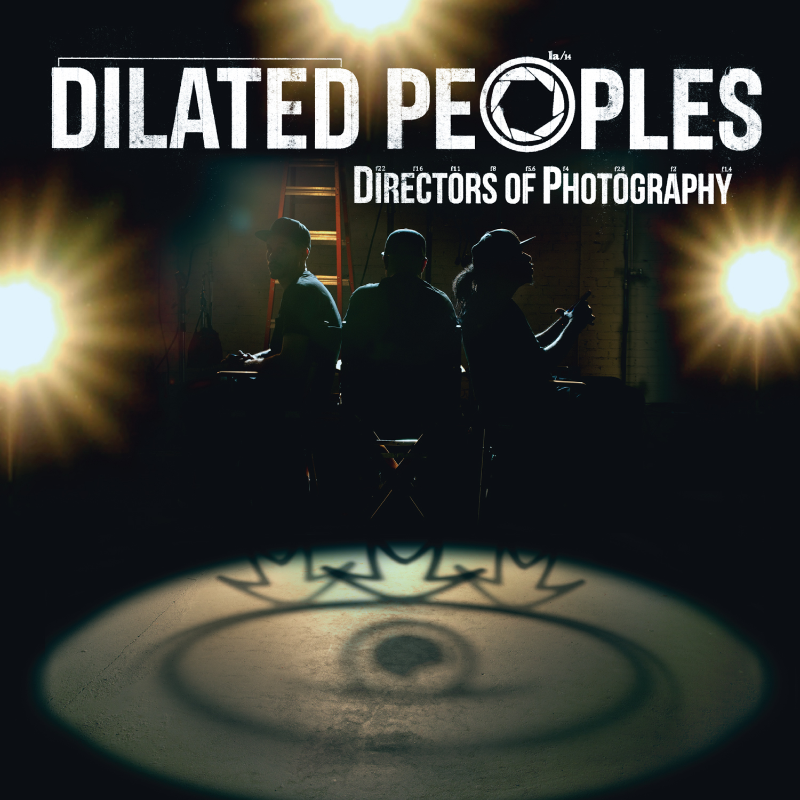 UPDATE: Dilated Peoples have released the tracklist for Directors Of Photography.

UPDATE #2: The stream of Dilated Peoples’ Directors Of Photography is now available via Pandora.

Listen to the album here.