Following the release of surveillance footage of Solange assaulting Jay Z, BuzzFeed has released “A Brief History Of Solange Knowles Speaking Her Mind.”

“Solange has never shied away from expressing herself, but until now, it usually hasn’t gotten physical,” BuzzFeed says of the list.

In the list, the publication includes several moments where Solange has been outspoken. In one clip, she reprimands a news team for speaking to her about Jay Z’s 40/40 club.

“I have to say, that was not a very professional introduction before,” she says in the clip. “Please don’t tie me into family and my brother-in-law’s establishment.”

Solange was unaware that the remarks in question regarding 40/40 had been made off camera.

Another moment listed is Solange’s criticism of Katy Perry. “But seriously. Iontlike the fact dat Julez thinks he gotta sneak & watched California gurls on u tube. Katy Perry is polluting the chirrens,” Solange said via Twitter.

The list also includes “Subtweeting Miley Cyrus’ VMA performance” as one of its moments. What the publication calls subtweets are below. 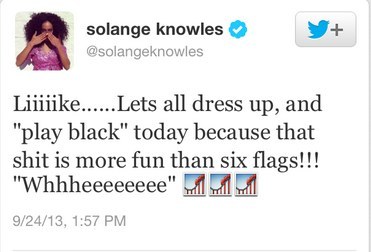