Jay Electronica made a series of Twitter updates yesterday (April 18), including many regarding his opinions about Hip Hop. During the series of posts, which he says were “brought to you by coconut ciroc and the crap tables at mgm,” the Roc Nation emcee also answered fan questions, including one requesting a ranking, #1-3, of the best verse on Big Sean’s “Control,” a selection that features Jay Elec and Kendrick Lamar.

“me, big sean then kendrick. he really didn’t say anything,” Jay Electronica said in a Twitter post. “no shots. everyone knows i like kendrick. but facts are facts.”

In August 2013, Electronica addressed the track, as well. “I like the song and the stir it’s causing,” Jay Electronica said at the time. “It’s good for Rap music.”

When the song was released, it made headlines thanks in large part to Kendrick Lamar’s subject matter.

“I’m usually homeboys with the same niggas I’m rhymin’ with,” Kendrick Lamar raps on the track. “But this is Hip Hop and them niggas should know what time it is / That goes for Jermaine Cole, Big K.R.I.T., Wale / Pusha T, Meek Mill, A$AP Rocky, Drake / Big Sean, Jay Electron[ica], Tyler[, the Creator], Mac Miller / I got love for you all but I’m tryin’ to murder you niggas / Trying to make sure your core fans never heard of you niggas / [And that] they don’t want to hear not one more noun or verb from you niggas / What is competition? I’m trying to raise the bar high.”

Kendrick Lamar and Big Sean are not the only emcees who come up in Electronica’s discussion. Jay praises several others, including Ab-Soul, who he calls a true jedi in Hip Hop.

Other people do not get the same praise. During his Twitter posts, Jay Electronica also discusses his displeasure with DJ Vlad, who runs VladTV, a Hip Hop website.

“I never liked vlad TV. that’s right.. I never liked you and your devilish energy. pussy…and vlad since you like blogging my rants.. make sure the next headline read… Jay Electronica says I’m pussy and he hates my blog. I’m issuing a fatwah on DJ Vlad. pussy…ok guys this was fun. I’m getting off now. and yes, vlad you’re still pussy. and we hate your blog as uch as we hate your face. poser,” Electronica said in various Tweets. 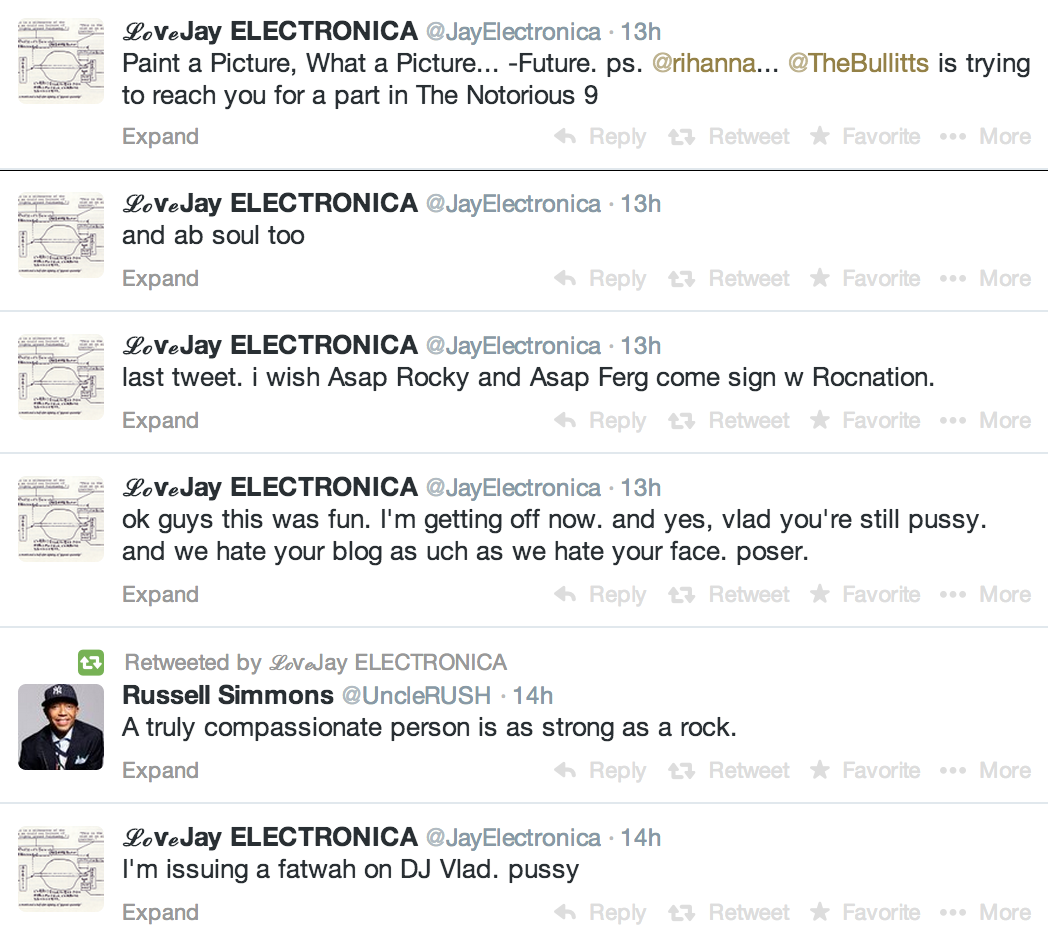 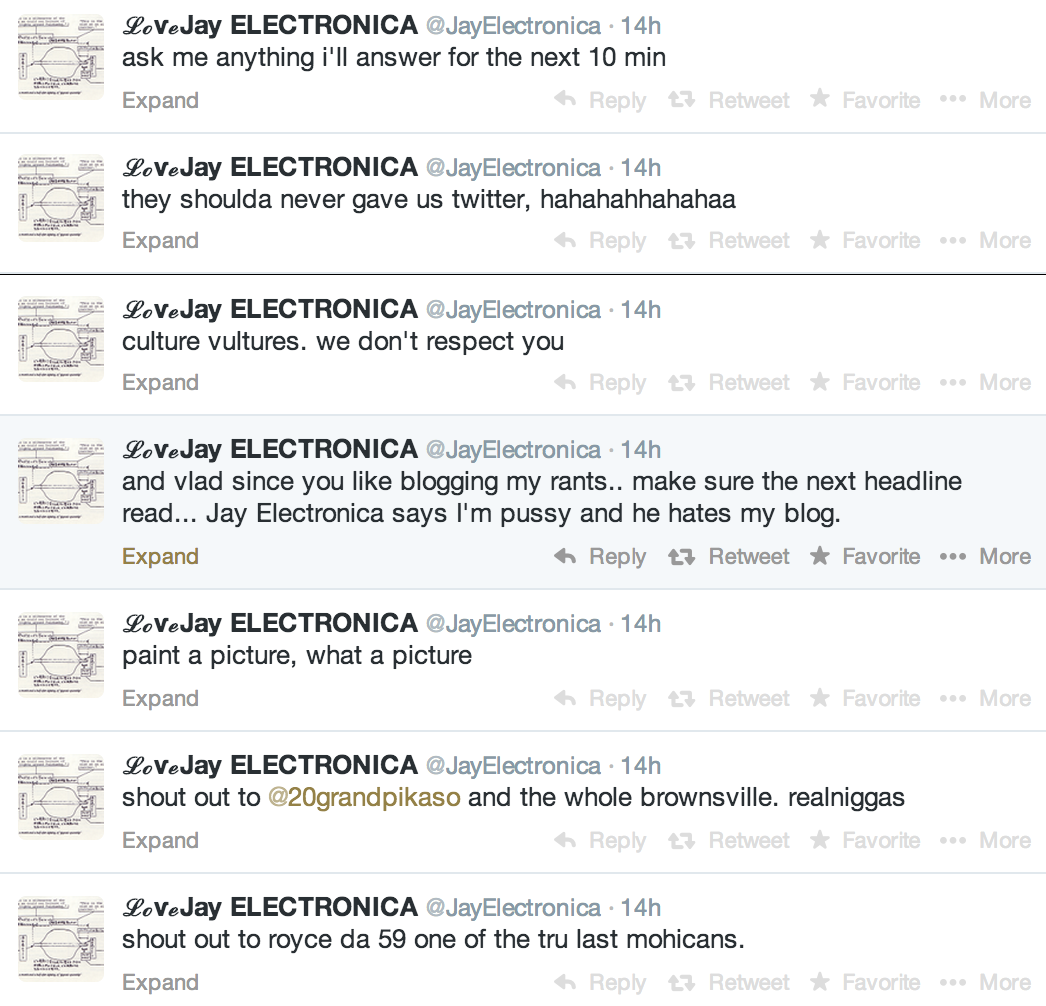 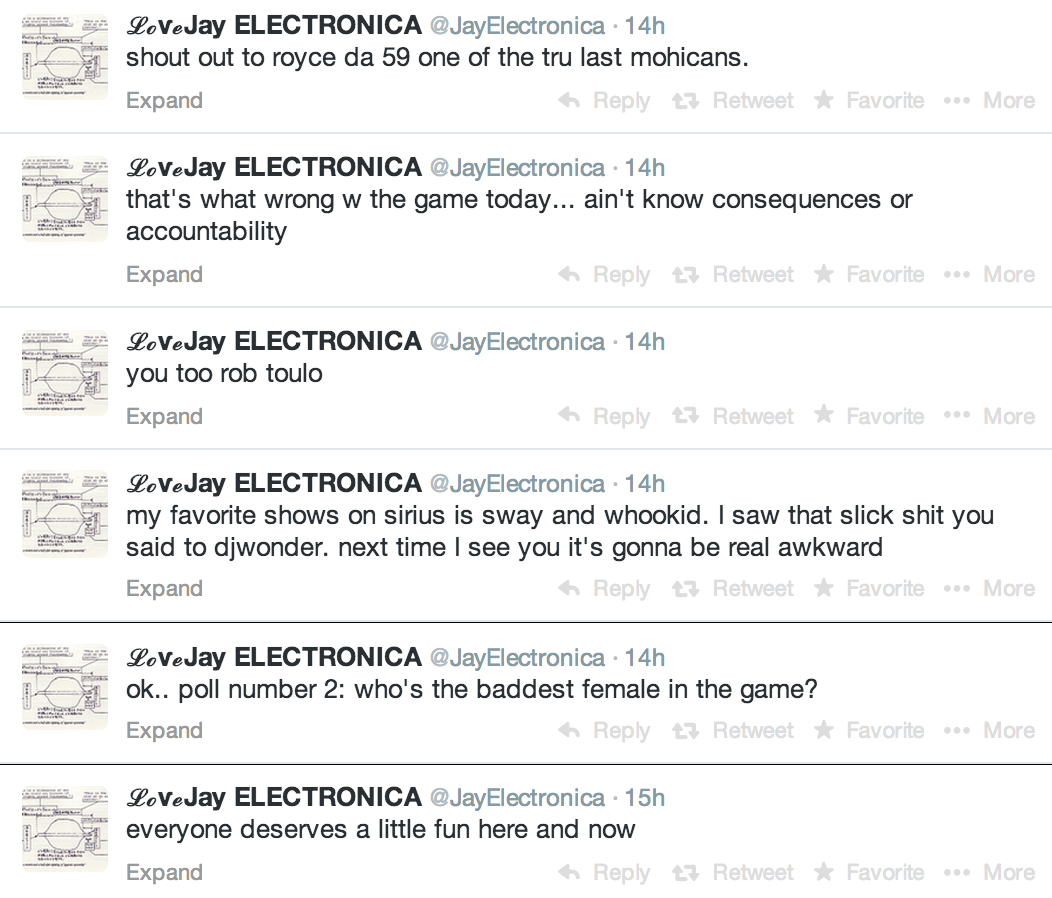 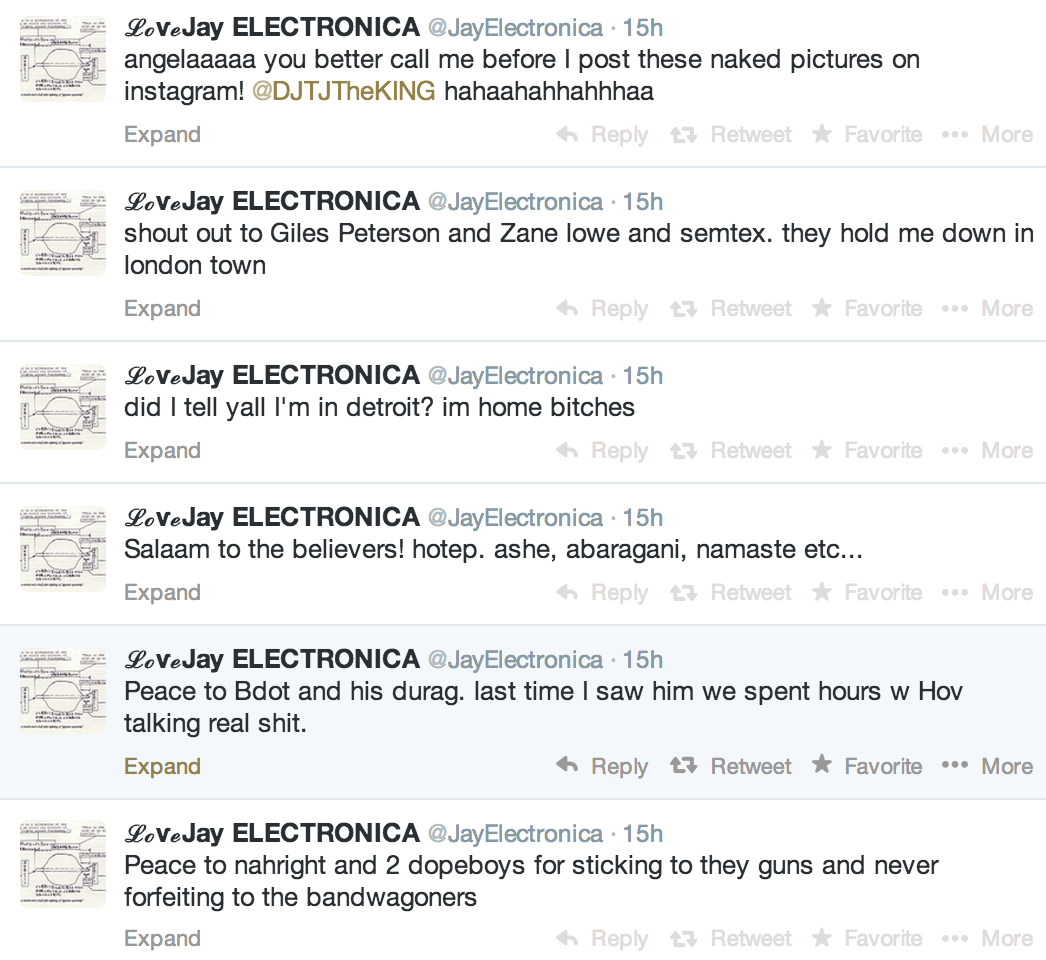 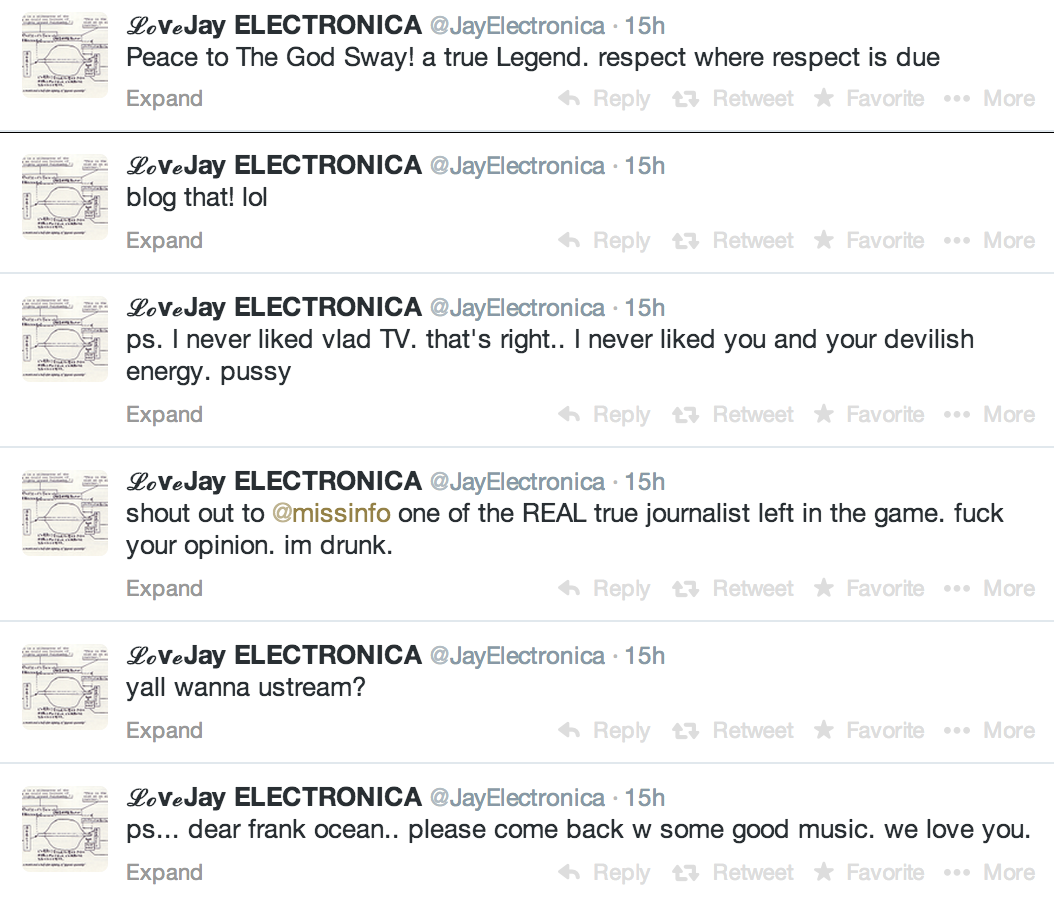 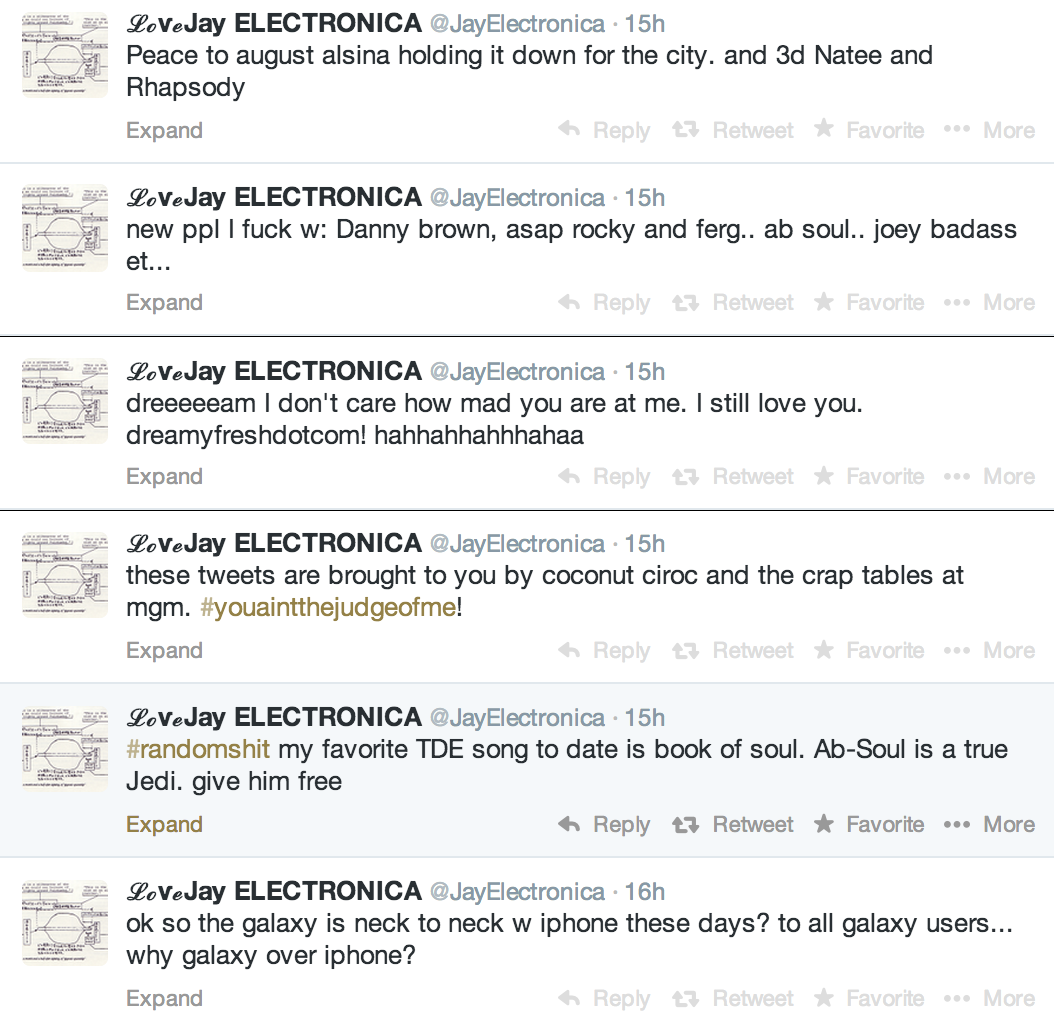 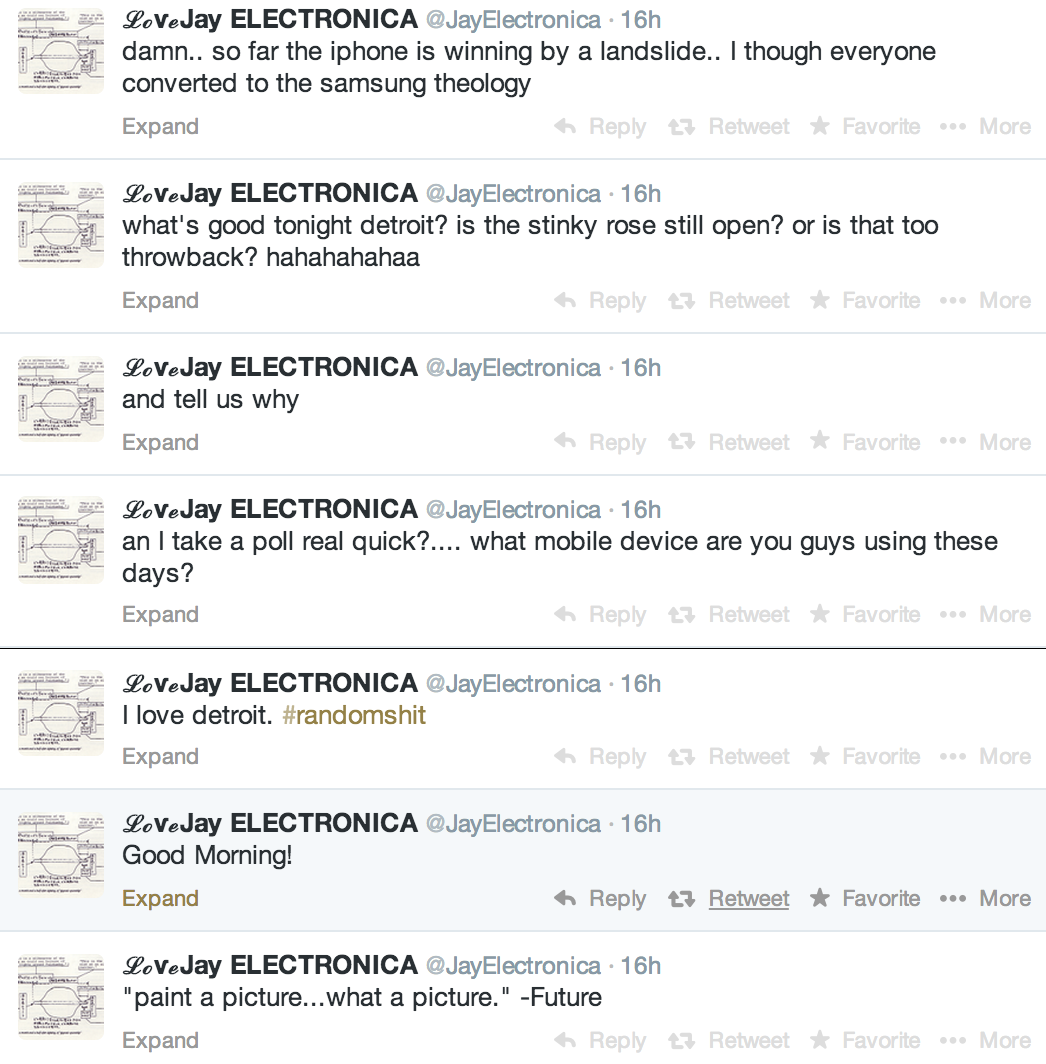 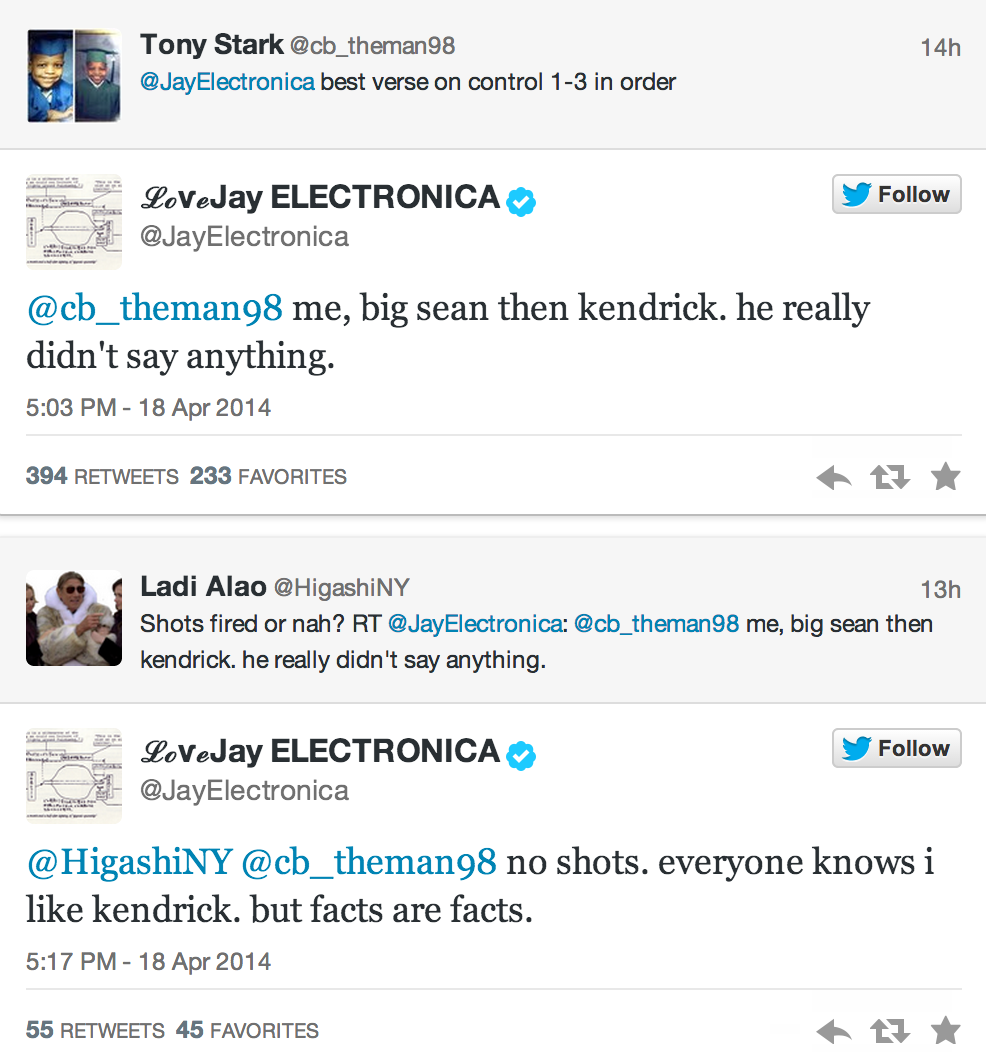 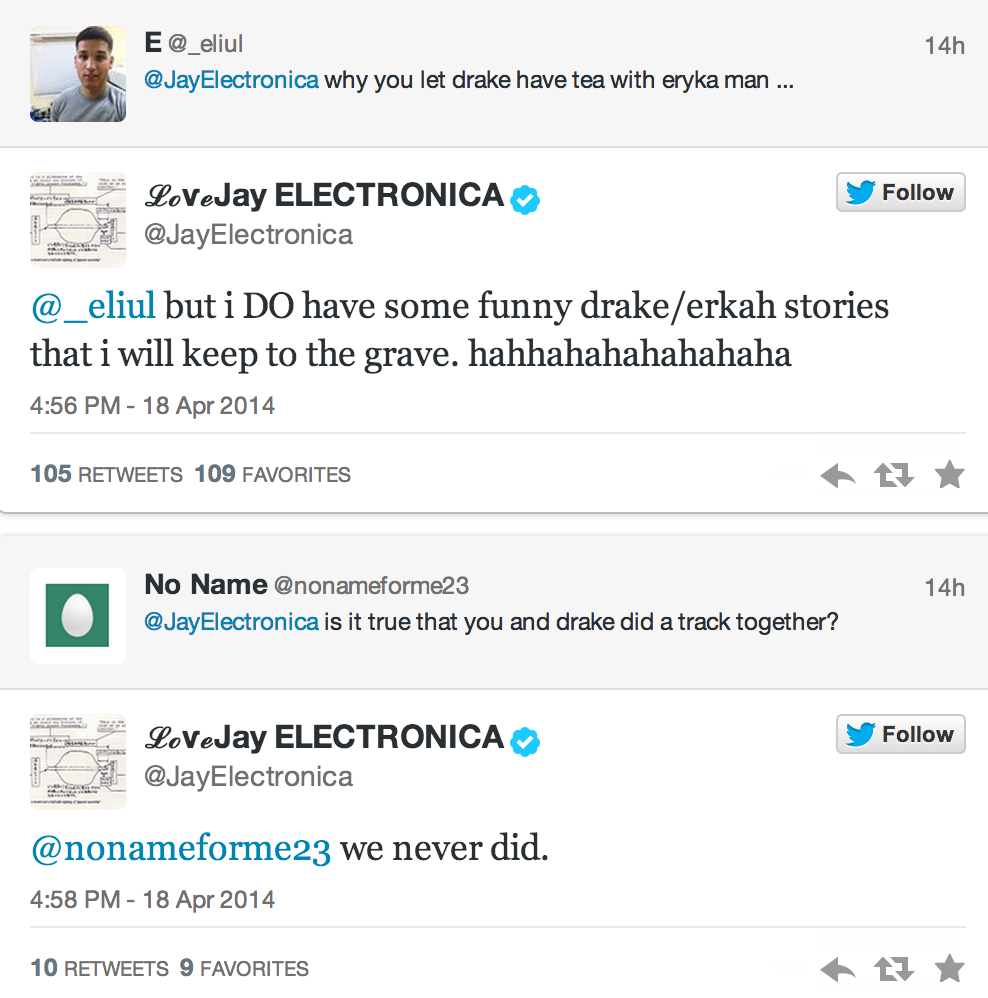