Jadakiss says more dates for this tour are set to be added, according to Miss Info.

Lox’s The Trinity EP was reviewed by HipHopDX when it was released. The EP earned a three out of five X rating in thee publication’s assessment of the project.

“Fans of The Lox likely won’t be disappointed,” HipHopDX said at the time. “For one, it’s a four-song EP that is exceptionally polished and mastered, so there isn’t much to overanalyze. But each emcee also has their moment in the sun. On the opening track, “Faded” (featuring Tyler Woods), Sheek Louch goes all in: “Ayo, I was young, I was gettin’ my hair braided / Momma pullin’ on my scalp, like God damn I hate it / Now I’m sittin’ in the coupe like, god damn I made it / I ain’t seen you in my life, how we God damn related? / That’s why I get faded / No matter if I spit the hottest shit I’m underrated.” Rhymes like these are commonplace on The Trinity. The bars are poignant and eloquently structured. Throughout their respective careers, all three members of The LOX have stayed consistent with their music, and this EP features nothing out of the ordinary.”

The tour itinerary can be found below. 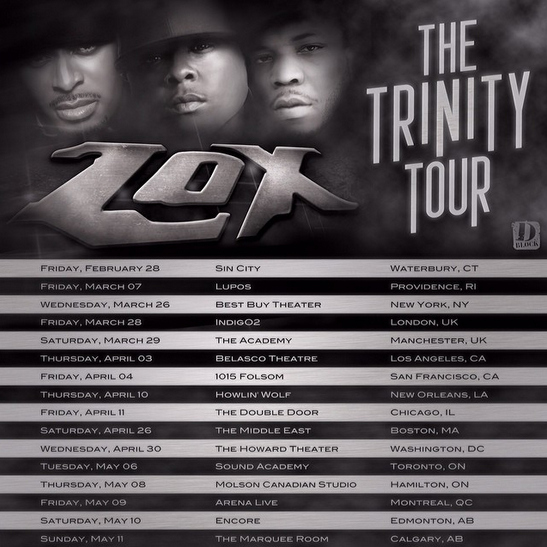