Lil B's "Thank You Based God" Lecture At University Of California, Riverside Filmed

Lil B’s lecture, titled “Thank You Based God,” was reportedly held at University Of California, Riverside yesterday (February 5). Organizers advised students to attend early due to their expectation of a high turnout for the Lil B lecture.

“A heads up to anyone planning on attending tonight’s ASPB-sponsored ‘Thank You Based God’ lecture at 7 p.m. in HUB 302,” the university said in a Facebook post. “Organizers expect this event to be completely full, and advise those planning to attend to begin lining up as early as 4:00 p.m. The queue will begin at the foot of the stairs near the Well and adjacent to Costo Hall. There will be no line inside the building. Please note that UCR students with valid UCR IDs will have priority access to the event until 6:45 p.m. As a result, there is a possibility that non-UCR students will not get in due to the overwhelming response.”

Lil B also spoke about the lecture in a series of Twitter posts.

LIL B EXTREMELY RARE LECTURE AND SPEAKING ENGAGEMENT TODAY AT UC RIVERSIDE!!! EXCITED AND I LOVE YOU!!!!!!!! – Lil B

@LILBTHEBASEDGOD THANK YOU FOR YOUR AMAZING LECTURE AND YOUR LOVE FOR ANIMALS AND PEOPLE, WE ALL LOVE YOU TYSM Y(TM)oe pic.twitter.com/hY8NWcHdkK

LIL B LECTURE AT UC RIVERSIDE WAS SOLD OUT !!! AND WAS HISTORY THANKS TO ALL THE STUDENTS AND STAFF THAT CAME TO SEE LIL B SPEAK! – Lil B 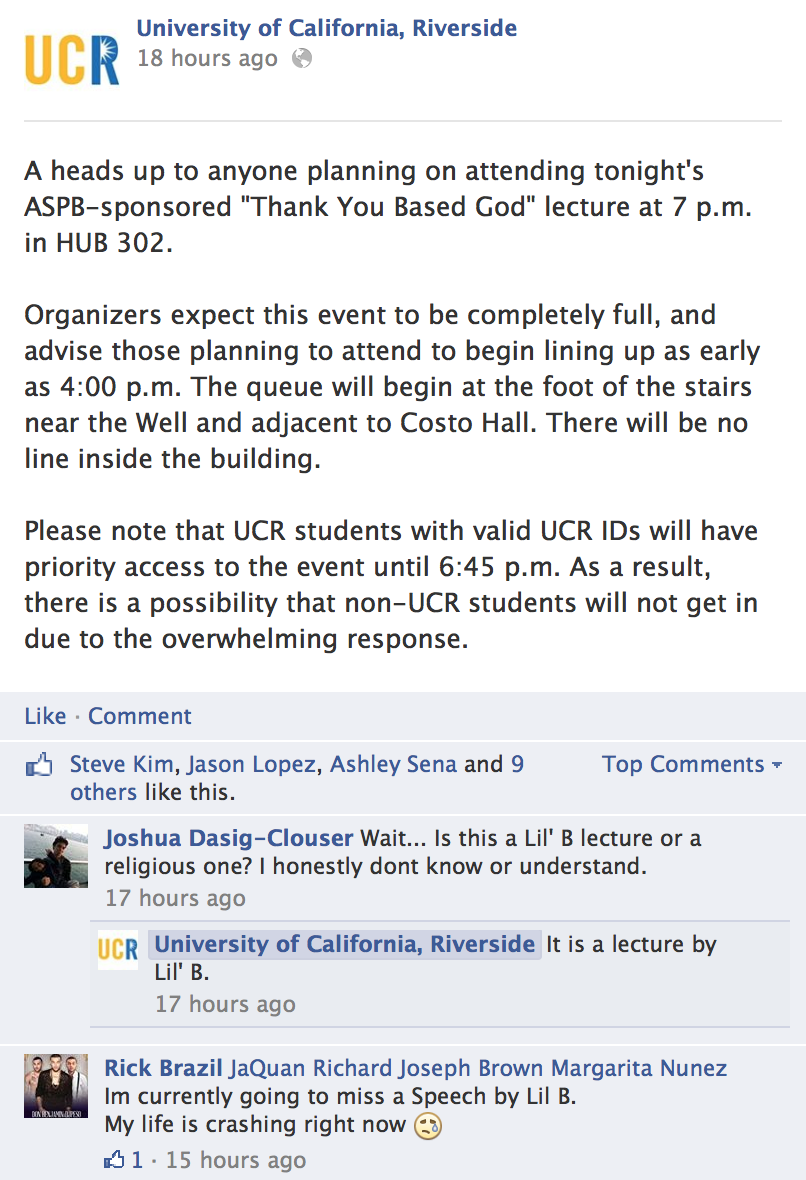 UPDATE: Lil B’s University of California, Riverside lecture was filmed and it was released on YouTube. The footage can be found below.