The National Basketball Association’s Toronto Raptors have announced that January 11 will be deemed “Drake Night.”

In honor of “Drake Night,” the Toronto basketball squad has partnered with OVO Sound to release a limited edition “Drake Night” T-shirt, slated to be given to the evening’s attendees for the home team’s game against the visiting Brooklyn Nets, a basketball organization that was previously partially owned by Jay Z.

Beyond “Drake Night,” Sports Illustrated reports that the Toronto Raptors are weighing the possibility of a re-branding effort that would change the team’s colors to OVO’s black and gold scheme.

In September, Drake and the Toronto Raptors announced a partnership. Drake was named the team’s global ambassador, an honor that the YMCMB emcee spoke about at the announcement press conference.

“There’s something genuine about this city,” Drake said at the time. “There’s something great. I think aside from that with All-Star coming here there’s an untapped nightlife, restaurants, culture. There’s so much to soak in and I think that our goal is in 2016 to truly showcase that, not only for the players, but also for everybody.”

Toronto is slated to host NBA’s All-Star Weekend in 2016. 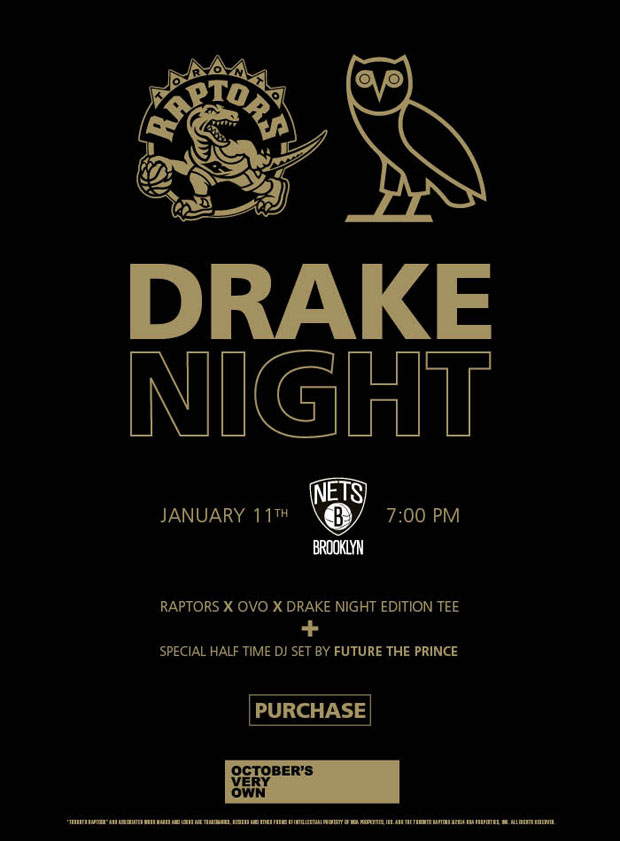